NYTimes Lens blog has a great post on what to bring and “What Not to Bring to Tahrir Square: Stephen Farrell Learns to Pack a Smaller Camera Kit.”

CAIRO — It is rare that the most important piece of equipment in your bag is the bag itself, even more rare for that bag to be a black plastic trash sack slung over your shoulder as you walk past pro-government thugs on a bridge over the River Nile. The trash bag’s purpose, of course, is to conceal your large nylon camera bag, which is likely to get you grabbed off the street by the aforementioned thugs.

Though my colleagues and I have worked in far more dangerous places and under far more primitive conditions, I don’t think I’ve ever before covered a story in which all the above-mentioned obstacles were present and taking turns on a daily — sometimes hourly — basis to become the principal barrier to getting the journalist in and the story out. 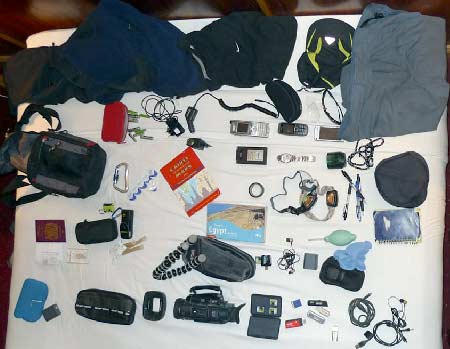