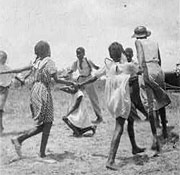 In 2001 I stopped by Stetson’s house, on a beautiful marshland near Jacksonville, Florida. We talked about his 1939-40 recording expedition, accompanied by Zora Neale Hurston, documenting the songs and stories of Florida. That interview and those recordings become the NPR story “The Sound of 1930s Florida Folk Life” (22:00 mp3):

is Stetson’s story of infiltrating and undermining the KKK. He tell it in this next clip, “Nazi-minded Klansmen” (4:26 mp3):

I done spent my last three cents
Mailing my letter to the President
Didn’t make a show, I didn’t make a dent
So I’m swinging over to this independent gent

Knocking on doors and windows
Wake up and run down election morning
And scribble in Stetson Kennedy
I ain’t the world’s best writer, ain’t the world’s best speller
But when I believe in something I’m the loudest yeller
If we fix it so you can’t make no money on war
Well we’ll all forget what we was killing folks for

We’ll find us a peace job equal and free
We’ll dump Smathers-Dupont in a salty sea
Well, this makes Stetson Kennedy the man for me 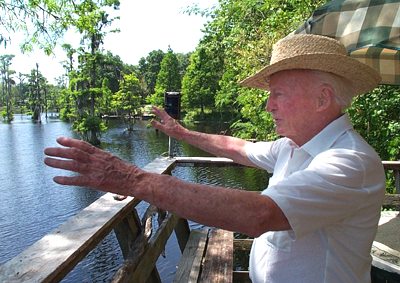 It was a thrill transcribing this man’s words for HV. A most remarkable life!

thanks for allowing me to hear my uncle’s voice again. He was a true pioneer and I am honored to be related to him.