This week’s HV cast is in support of Burmese demonstraters: The popular Burmese rock band Iron Cross is using music to challenge the nation’s infamously repressive regime. In the great tradition of rock and roll, Iron Cross is taking on Burma’s military government with song. A story by Scott Carrier, “Iron Cross Battles Burmese Repression” (7:39 mp3):

This week’s HV cast: The last half of A Hot & Dry Summer Special, hosted by Ben Adair of APM Weekend America: The Quiet American (Aaron Ximm) sound-captures the forbidding warning signs rattling in a harsh wind and “Desert Sun” outside the nuclear Nevada Test Site north of Las Vegas. Back in the early 1990s, SLC producer Scott Carrier found the Basin & Range, near Nevada’s “Battle Mountain,” beautiful, lonely, dreary, and full of sagebrush, solace and stories. And more of Bernie Krause’s Desert Solitudes. A special from Hearing Voices, “Desert Air 2- of 2” (29:00 mp3):

This week’s HV cast: The first half of A Hot & Dry Summer Special, hosted by Ben Adair of APM Weekend America: Coyotes, owls, frogs and songbirds are part of Desert Solitudes, recorded by Bernie Krause and Ruth Happel in the Sonoran and Chihuauan deserts, part of New Mexico’s panhandle. Host Ben Adair heads down to the ghost towns, Opera Houses, century-old abandoned mines, and billion-year old boulders along Death Valley’s “Mojave Road.” And Kraut-rockers Faust dial in “Long Distance Calls in the Desert,” from their album Rien. A special from Hearing Voices, “Desert Air 1- of 2” (23:00 mp3): 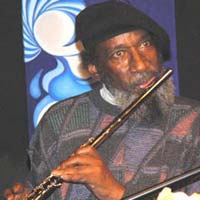 Nawlins jazz flute player Eluard Burt passed this week. We did a nice (if we say so ourselves) sound-portrait of him in 2005. It’s part of our New Orleans [Yawp] webwork.

George Ingmire of WWOZ is playing a tribute to Eluard on his show today.

This week’s HV cast is a trip to Easter Island to gather recordings of local musicians and theories on who made and moved the “moai,” the ilse’s famous stone heads. A mystery of aliens, archeologists; and arboreal emptiness: What happened to all the trees? A story by Jack Chance, “Big Stone Heads” (6:09 mp3):

This week’s HV cast is a portrait of the non-fiction writer Charles Bowden, told by the people he’s written about and the editors he’s worked with. Bowden lives in Tucson, Arizona, and has written extensively on the cultural and physical environment of the Southwest. His style is both harsh and beautiful, and somewhat painful to read, as he takes the position that we are all to blame, or perhaps that there is no one is to blame, for the violent and destructive acts committed against nature and society. He writes about child molesters, drug traffickers, savings and loan executives, real estate developers, and crooked politicians in a way that implicates all of us. And so his work has been largely ignored. These interviews, hopefully, will help end his anonymity. A story by Scott Carrier, “The Thing Just Beyond Our Reach” (22:41 mp3):