In the HV hour All Happy Families we featured our interview with Steve Fugate. Now his story is being told in film, “Love Life: The Tale of Steve Fugate:”

Over the last ten years Steve Fugate has walked over 21,000 miles of the United States, and he has done it all with a sign over his head that reads “Love Life.”

This is the story of why Steve has walked for so long, and the impact he has on the people he meets.

The Love Life Film site has a short video of this work in progress. More info on Steve is at his site, Trail Therapy.

YouTube’s Screening Room featured this 40-min video portrait of street performer, Thoth. This Oscar winning film has an elegant story structure, steadily revealing more elements of the man, his music, and his “prayformances” (go to YT and click HQ for their high-quality vers), “Thoth” by director Sarah Kernochan:

Grandchildren‘s video on the Making of Mykonos.

Also at YouTube. Hi-fi fuqd and clean versions at RevoLucian (and his Space). Original unmix (Bale-only) mp3 at TMZ.

UPDATE: Another of Aubrey’s film’s “See You Then” made the Nikon Top 10: 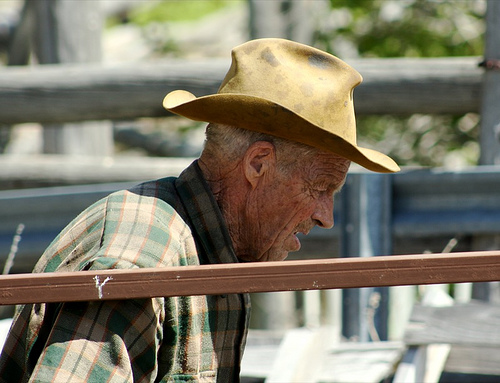 This Ben E. King song is performed “by musicians around the world adding their part to the song as it travelled the globe.” Then it’s mixed into a moving whole, as part of the project and documentary film “Playing For Change: Peace Through Music” (producer Mark Johnson on Bill Moyer’s Journal).

Playing For Change: Song Around the World “Stand By Me”

The Mountain Music Project went lookng for connections between the music of Appalachia and the Himalayas. They found ’em. The film will be finished by end of 2008 (produced by HV’s Jack Chance). The trailer is out now and gorgeous, “A Higher Lonesome Sound:”

From the March/April 2008 Issue of The Believer, a conversation between two great filmakers: “Errol Morris talks with Werner Herzog.”

I was a private detective for years after I started as a filmmaker. I like to think, of course I could be completely wrong, that there’s this detective element in everything I do. My movies start from interviews. Everything that I’ve really done. —EM 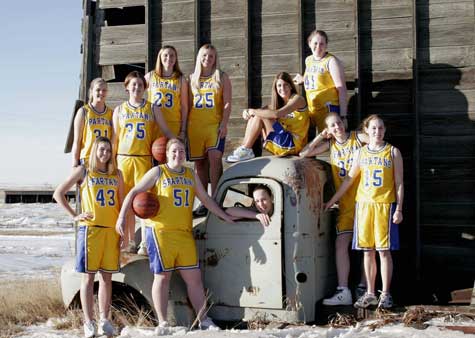 
Here’s a higher-rez vers, with some pre-explsoion set-up; the bombs blast 3:50 into the clip.

The Hollyweird writer’s strike pits the wits of the Alliance of Motion Picture and Television Producers (AMPTP) against the pens the Writers Guild of America (WGA). Well, online at least, the WGA pens have the AMPTP pinned. AMPTP.org never got around to registering AMPTP.com, but WGA did. Sez Deadline Hollywood Daily of this “satirisite”:

It looks almost identical, too, down to those Did You Know? factlets. (Example: Six out of 10 non-Judd Apatow movies never recoup their original investment… “Writer” comes from the Latin ritem meaning “unhygienic and doughy.”) This is what clearly happens when writers have way too much free time on their hands.

From the AMPTP.com home page:

We are heartbroken to report that despite our best efforts, including sending them a muffin basket, making them a mix CD, and standing outside their window with a boombox blasting Peter Gabriel songs, our talks with the WGA have broken down.

While we’re not going to point fingers or assign blame, we do feel justified in saying that they are entirely at fault.

Why does the WGA hate freedom and democracy so much? 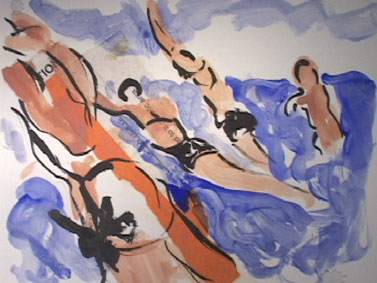 Animating water in watercolor, the beautiful short film “L’Eau Life” is at The Animated Life – Opinion – New York Times Blog. It’s by painter Jeff Scher: “I wanted to get the feel of water and the emotion of being in it, while capturing the water action moments that are the most fun to draw: jumping, swimming, falling in and climbing out.”

From Wholphin DVD mag comes a short (4:11) directed by Miguel Arteta, writ by Miranda July. John C Reilly asks several folk (including July) “Are You The Favorite Person Of Anybody?:”

via Puddles of Thought. Go Chasé.