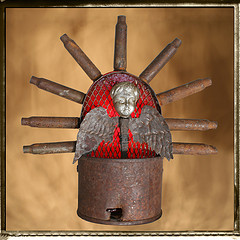 Scupltor Kenn Coplan has been making Rust Angels out of desert debris:

Rust Angels are made from recyled material (Trash) that I have collected from my local deserts. My hope is to create 1,000 Rust Angels in the tradition of Sadako Sasaki, who tried to make a thousand cranes (Senbazuru) to grant her wish for her life after she was irradiated in the nuclear bombing of Hiroshima during World War II.

Commisioned by a Burnley Council, England as part of the Big Art Project; created by the architects Tonkin Liu for a hilltop at Crown Point, Lancashire, England, is the “Singing, Ringing Tree:”


There’s also a video on the making of this Panopticon at YouTube.