HV doubled down with two pieces on NPR Day to Day, the first— There’s history and politics hidden in the songs of Tibet, which has been under Chinese control for half a century. A music recordist visits during Losar, the Tibetan New Year, looking for traditional music (produced for KGLT-Bozeman), “Song of Tibet” (3:30 mp3):

A masters hands plays the Danyen; a Tibetan type of banjo: 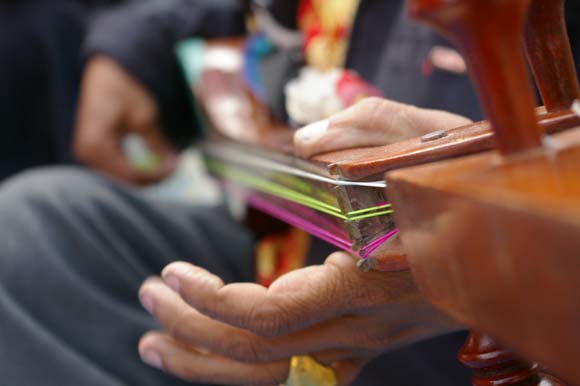 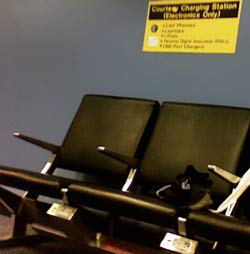 Hey, travelers, if you’re doin’ time at Chicago O’Hare, there’s a bunch of free AC power plugs, plus USB power, in comfortable seats down a very quiet, little-used hallway. It’s in Terminal 2 and runs between the E and F gates (around E4, F4). I’m bloggin from there now. Just video-Skyped the wife and collected the dozens of emails that’ve piled up since last connectivity. Maybe most of ya think I’m easily amused and this ain’t nada to rave about, but a little peace, power solitude, and sanctuary in an otherwise congested noisy airport, well, I’m diggin’ it. To the right is a photo-booth snap of these AC/USB-ed seats I and a few others are enjoying. Oh yeh, one more vital piece of info: current security advisory threat level: Orange. I believe that’s just below Pineapple.

An beta vers of an NPR Station Coverage Map. Roll over transmitter icons and it shows the areas covered and signal strength.

In planning our next bike trip I stumbled upon Wikitravel, “a project to create a free, complete, up-to-date and reliable world-wide travel guide.” E.g., check Route 66 or Santa Fe Trail, nice play-by-play of the route for travelers.

I-10 west outta New Orleans goes right thru the Atchafalaya swamp. Right thru it, several times; the highway’s held up on posts for miles. Was listening to a country station playing the trad stuff: Merle Haggard, Dolly Parton, and this one from George Strait… but before I post the song, I gotta give it setting.

Ok, think driving 85mph toward a skyfull of Louisiana sunset; air full of mositure and swamp smells, cranes flying overhead, passing places named Lake Ponchartrain, Whiskey Bay, and Bayou Teche; the windows rolled all the way down, but the radio turned up plenty loud to hear it clear over the wind and engine noise. Now, outta the speakers pours George Strait “Amarillo by Morning”: 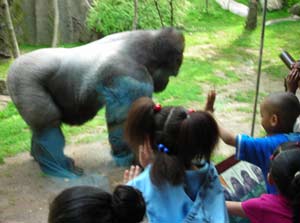 High time in NYC, HV style. Dinner with Ann & Kara (they’re thinking of a new road-trip on the Can-USA border radio series), then we all had drinks w/ BenW (“multi-media platforms” for American Experience, including vid-diaires via video phone from Tohono O’odham Indian rez.) My fren Scott Edmonds (who designed orig HV site) was monitoring a community ceramics guild and has a new start-up, Smatter TV. And the next nite SarahV brings me to Beethoven’s 9th at Lincoln Ctr. Was in town to record at the Bronx Zoo: 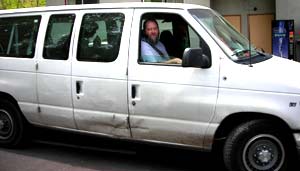 Stayed in the low-rent district of the Bronx, in middle of wondrous Co-op City. As I was leaving the hotel, so was a band of grizzled musicians packing up their van. “Who is ya?,” sez I. “The Gourds,” sez they. Outta Austin TX, The Gourds are cult faves for their bluegrass vers of Snoop’s “Gin &: Juice.” They just played my Montana town. We smoked and yakked and they gave me a CD. From Blood of the Ram, The Gourds “Wired Ole Gal”:

We at HV travel a lot. Sooner or later those travels take you back in time, to somewhere you once lived. For me it was a couple days ago at U Mass- Amherst. I’d lived there a few years in the 70s.

I drove in at night blasting a classic rock station playing songs from that time: Bob Seger, Fleetwood Mac, Led Zep. It was just the music I’d drivin into this town with so many nights before. And I was just as tired and starting to see things that weren’t there — tho back then the lack-of-sleep hallucinations were pharmaceutically enhanced.

I pulled in just as the bars let out. Walked the main drag, marveling at the spectacle of America’s youth, unfettered by parents and encouraged by alcohol. I’m glad to see U Mass is still Zoo Mass. Tradition must be maintained.

Soon I ended up on campus, walking by roads to places I’d lived. What word is there for that flood of feelings you get returning to a place of your youth? In the dark, it’s especially eerie, familiar yet unrecognizable; former selves of you everywhere; you’re in one space but two different times.

Usually I like to stay and explore the past, but here I had neither time nor desire. I was scheduled for a pre-dawn meeting in the woods with a guy who records birds. So at 3:30am Amherst was in my rear view mirror. The town seems to be doing fine without me.

A couple weekends ago NPR bestowed the title of The Most Captivating Voice in the World to Iris Lettieri, the announcer at Rio de Janeiro’s international airport. Her “voice is so seductive that travelers have been known to miss their flights just to listen to her.” Here’s a clip from (lang: Portuguese) Iris’ website:

They did not huff. They did not puff. The Israelis simply tore the house down. The Palestinians did huff and puff, threw a rock and some words, but they were no match for the police carrying our M-16’s.

From the neighbor’s rooftop I watched the destruction below. An Arab man cried next to me. Across the valley was the opposite: construction, of Israeli settlements. They say there should be a road where we stand, and where the house once stood, and where 17 more should fall. Though there is already a road on each side.

In yet another house I had coffee, a hospitality in every Palestinian home. I am wired after so many visits, the walls buzzing, shaking in fear. I am always welcome, the children offer me candy. The TV was on when I entered, Bush was talking, but there was no sound. They clicked it off.

Palestinian living rooms have a fondness for silk and plastic flowers. Unnatural colors, brilliant, florescent, like ones you find at grave sites left by a devout but busy family.

Their order has come. They tremble the paper at me, it is written only in Hebrew. They have less than a month to leave the house. The flowers will survive, they survive anything, that is the nature of plastic. They house will not. Maybe they can be laid on top after the walls become jagged tombstones of their former selves.

A child, one of three in this house smiles at me, I smile back. Her nose is stained a strawberry-red color, I figure she had been eating some. I looked at her dad. “She fell,” he said. Some wounds you need only to wipe the blood away, one more wash and she will be clean again. It will only remain hurting somewhere in her memory. She will discover that other wounds take longer to heal. And sadly, that some wounds never heal.

The destruction crew, in an odd display of care, stretches red caution banner tape around the fresh rubble next door. It flutters angrily in the wind after the last soldier has left.