Keegan-Michael Key asks his doctor is Levitol is right for him, from MADtv, Season 12 Episode 5:

Morrow- will not walk in fear

“We will not walk in fear, one of another. We will not be driven by fear into an age of unreason, if we dig deep in our history and our doctrine, and remember that we are not descended from fearful men, not from men who feared to write, to speak, to associate, and to defend causes that were for the moment unpopular.”

Flight of the Conchords

Flight of the Conchords was a BBC radio series, is an HBO TV show, and are New Zealand’s “fourth most popular guitar-based digi-bongo a cappella-rap-funk-comedy duo.”

MP3s from What the Folk fansite.

The legendary late-night interviewer Tom Snyder died this week. Here’s some of his CBS The Late Late Show and NBC The Tomorrow Show guests:

The entire Internet has crashed. All data lost:

Leave the Phone, Take the Mic

Just so we’re not the only blog in the world without cell-phone salesmen phenom Paul Potts:

From Broadcasting & Cable “FCC’s Profanity Ruling Against Fox Thrown Out“:

The court said the FCC’s “fleeting expletives” policy did not pass muster for “failing to articulate a reasoned basis for its change in policy.”…

The FCC found two Fox Billboard Awards show broadcasts to be profane, and thus indecent, because they allowed variants of the word “fuck” and “shit” to be broadcast outside of the FCC’s 10 p.m.-6 a.m. safe harbor for “indecent” broadcast speech.

Fox argued that neither of the broadcasts would have been found indecent under the previous almost 30 years of FCC indecency policy (1975-2004) and that “without adequate explanation or even acknowledgment, the FCC has abandoned the restrained understanding of indecency that served the public for three decades.” 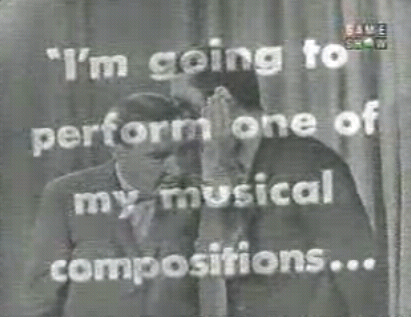 John Cage performs — using Water Pitcher, Iron Pipe, Goose Call and a slew of other musical implements — in 1960 on the game show I’ve Got a Secret: video at WFMU’s BOTB: John Cage on a TV Game Show in 1960 video

A few months ago we did an NPR series on the NEA book project
Operation Homecoming, which asked troops returning from Iraq and Afghanistan to write down their experiences. This week, as part of the America at a Crossroads PBS series from, The Documentary Group produced a moving collection of video interpretations of writings from the book, along with interviews with the troops/authors:

Original Post: The TV vers of This American Life premieres tonite (Thurs Mar 22) on Showtime. They’ve also revamped their web. And I.Glass will tell all on the upcoming Bob Edwards Weekend— here’s the promo:

I always tell people: I’m never unrewarded for watching C-Span. Proving the point was yesterday’s Valerie Plame Speaks Before Congress. The testimony turned to live theatre as the audience flashed signs in front of the cameras. The funniest was a guy (I think) dressed in pink as a woman, with a t-shirt that read: “Impeach Bush”:

But forget politics, I like C-Span for its raw undedited information. After Ms. Plame came Bill Leonard, National Archives director of Security. He gave clear, concise testimony on how a document gets classified, and how long it stays classified, and how it gets declassified — procedures I and, I’d guess, most folk never knew. Edifying and entertaining — who sez C-Span is boring?BTW, I read a conjecture that Pink Man above might be Code Pink. Or maybe he’s Pink Bloque; Jonathan Menjivar and I did a story on them a while back.

Pretend You Got Some Balls

From the BBC kids TV series Listen with Mother, Ann Driver as Mom demands to know: “Where’s Your Balls!” (mp3)

(Off the out-of-print LP: Dead Parrot Society: The Best Of British Comedy, Rhino 1993. Thanks to Lukas Geyer, fellow KGLT-er; check his posts at the great WFMUs Beware of the Blog: Lukas Posts.)