Did you know about these things? BASE jumping, or really flying, with a “Wingsuit”: 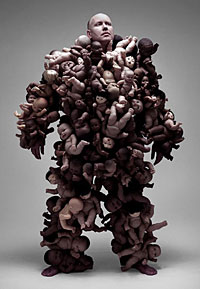 Stephin Merritt stays in NPR studios until he comes up with song. The song is inspired by a Phil Toledano photo (right). Two days later, from a shaky start, he gets a fine tune. The process is all captured on video and in an NPR-ATC report : “NPR Music: Stephin Merritt: Two Days, A Million Faces.”

The Chase Is On

My niece-in-law, Chase Sbicca, has a new blog, Puddles of Thought. So far she’s linked to 4 vids and I’ve liked ’em all (even her fren’s wedding demo): ie, she’s batting 1000. She’s fresh outta Eugene J school w/ a broadcast degree, an encyclopedic knowledge of several major sports, and an interviewing prowess that’s even bent Beckham. Won’t someone give this future TV sports-reporting star a job?

The Public Radio Talent Quest has posted vid of the winners, presented at the PRPD. The tape proves once again proves how much Glynn (Snap Judgement) rox:

Too down home for words, Jimmie Rodgers sings “Waiting On A Train”:

For the preceeding Murrow mp3, I tried out the new Zamzar – Free online file conversion. Submitted an online real-audio file thru Zamzar’s eb form; received an email w/ an mp3 attached. All went well. They can do the same for image, audio and video formats.

Catch This American Life this weekend? Here’s the Nike vid of Luis “TRIKZ” da Silva from Act One:

From This Just In via Funny or Die, “Bullies Vs. Sissies:”

Young@Heart, whose “members all lived in an elderly housing project in Northampton, MA,” sing The Ramones “I Wanna Be Sedated:”

Lions vs Buffalo vs Crocodiles

Also found at WFMU’s Blog, “a battle between a pride of lions, a herd of buffalo, and 2 crocodiles at a watering hole in South Africa’s Kruger National Park.” You gotta watch it all; you’ve never seen nuthin like it. Note: the start may disturb those who have probs w/ how lions shop for meat:

Laurie Anderson has a new song (“Only an Expert” @ Lincoln Ctr), if indeed something by her can be “new,” cuz it still sounds like Laurie Anderson which ain’t a new sound. But, hey, I’m still a half-a-fan, so I’ll post something old that sounds new and looks great, the “Sharkey’s Day” vid by Laurie Anderson: