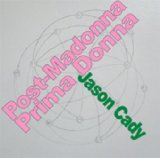 Jason Cady and the Artificials experiment with opera. The following piece is in five parts, Overture, Recitative, Aria, Recitative II, and Finale. The two Recitatives are priceless: they are operatic renditions of everyday conversations, recorded by the composer. “Recitative” (at 2:10 into piece) is about how folk from Michigan say “m’Bye.” Recitative II (at 6:10) dialogs on the dictionary definition of “resplendent.” Jason Cady and the Artificials, “Post-Madonna Prima Donna” (9:35 mp3):

Jason Cady talks about his compositions on the podcast Sound Speaks for Itself.