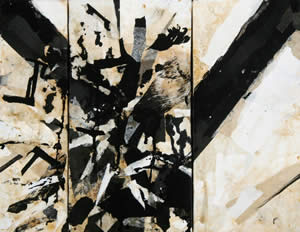 Painter Jerry Inverson (an HV fren) received a Montana Arts Council Artist’s Innovation Award. In artspeak: “He uses traditional materials, including sumi ink, layers of very thin paper, and rabbit skin glue to create black and white abstract canvases that are influenced by Asian calligraphy, yet outside the structure of language.”

Check his sheep-shearing series in HV art/audio “Counting Sheep” webwork. Jerry is represented by the Pulliam Gallery, Portland OR.

The MacArthur Foundation selected the Public Radio Exchange for one of its 2008 Award for Creative and Effective Institutions, which comes with half-a-million $mackers. PRX is an audio archive site, an essential public radio tool and community. We at HV use it almost daily. Righteous to see their recogintion. PRX was one of eight orgs chosen for this MacArthur Award.