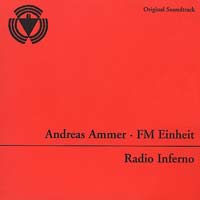 Feel like you’re going to hell? Why not try the audio-tour first: Radio Inferno Hörspiel nach Dantes Inferno in 34 Gesängen. Translated from the Nazi, er, I mean German, “hörspiel” means “ear-play.” “Radio Inferno” was a 1993 radio drama of Dante’s “Divine Comedy,” by artist Andreas Ammer with music by FM Einheit (of Einstürzende Neubauten). BBC DJ John Peel is “The Radio” (the narrator), and there’s guest appearances from Bootsy Collins and many others. All the tracks are posted (MP3s) at UBUWEB and at WFMU…

From “Canto XVII” in the Third Circle of Hell: “Here beatnik Burroughs has to read his own books for all time.”

WFMU’s Beware of the Blog: Only Fidel Can Provide Candy posted four video “excerpts from what is possibly the greatest propaganda film ever, Ron Ormond’s 1971 commie-bashing If Footmen Tire You, What Will Horses Do?. Be forewarned, the commies do some awful things to these poor kids, and it can get kind of revolting. Portions of this film have been sampled heavily by Negativland, including their classic Christianity is Stupid.”

Happy Easter Everybody. Watch your back: 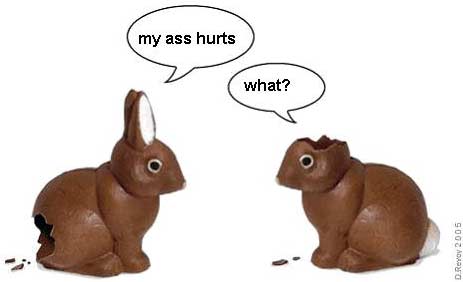 She fell before the exhibit of the Treblinka Death camp where 870,000 Jews lost their lives. Not a dramatic fall, just standing one moment, gone the next. “Open up! all asleep!” The German commander would yell after listening at the gas chamber door, said the video interview playing over a model of the camp; it was the job of this old man — no, boy — speaking to us on the screen to pull out the bodies. Elijah Rosenberg. “Someone would examine the teeth,” he said, opening his mouth to demonstrate, “pulling out any gold.”

The woman — no, girl — who collapsed onto the museum floor before the first death camp was very young, only 18, but in Israeli army uniform. A pack of brown clothes and red eyes sobbing and shuffling through the museum. “Every moment someone would collapse in a faint,” said one video survivor of the Warsaw ghetto firestorm of 1943. The TVs are not just monitors, they are also mirrors, reflecting the viewer’s image — we have become ghosts of the present watching history.

“Why do the trains go full and return empty?” half a boxcar in front of us, “it makes no sense,” asks a Polish resident long, not long, ago. The tour buses, huge padded coaches idle outside the museum; they come full, and leave full. END_OF_DOCUMENT_TOKEN_TO_BE_REPLACED

They did not huff. They did not puff. The Israelis simply tore the house down. The Palestinians did huff and puff, threw a rock and some words, but they were no match for the police carrying our M-16’s.

From the neighbor’s rooftop I watched the destruction below. An Arab man cried next to me. Across the valley was the opposite: construction, of Israeli settlements. They say there should be a road where we stand, and where the house once stood, and where 17 more should fall. Though there is already a road on each side.

In yet another house I had coffee, a hospitality in every Palestinian home. I am wired after so many visits, the walls buzzing, shaking in fear. I am always welcome, the children offer me candy. The TV was on when I entered, Bush was talking, but there was no sound. They clicked it off.

Palestinian living rooms have a fondness for silk and plastic flowers. Unnatural colors, brilliant, florescent, like ones you find at grave sites left by a devout but busy family.

Their order has come. They tremble the paper at me, it is written only in Hebrew. They have less than a month to leave the house. The flowers will survive, they survive anything, that is the nature of plastic. They house will not. Maybe they can be laid on top after the walls become jagged tombstones of their former selves.

A child, one of three in this house smiles at me, I smile back. Her nose is stained a strawberry-red color, I figure she had been eating some. I looked at her dad. “She fell,” he said. Some wounds you need only to wipe the blood away, one more wash and she will be clean again. It will only remain hurting somewhere in her memory. She will discover that other wounds take longer to heal. And sadly, that some wounds never heal.

The destruction crew, in an odd display of care, stretches red caution banner tape around the fresh rubble next door. It flutters angrily in the wind after the last soldier has left.