This is beautiful: Keyboardist Henry Hey of the band Rudder plays with the rhythm and melody of Sarah Palin speech:

Did watching the 2nd and 3rd debates give you a feeling of déjà vu? This montage of synced-up footage from all three presidential debates confirms our deep-seated belief that every debate was exactly the same.

Get the latest news satire and funny videos at 236.com.

rx has a new video, sampling George W Bush doin’ it “My Way:”

Another musical Obama-nation, Ben Sollee re-does his tune w/ the Best of Barack mixed in by DJ 2nd Nature:

More info and links at Some Velvet Blog.

The Orb often makes ambient-electro music out of spoken-voice snippets using of the rhythm of the speech. Their best-known spoke-sampled-song (details on clips used below) is from 1991, off The Orb’s Adventures Beyond the Ultraworld, “Little Fluffy Clouds:”


Wikipedia has a complete history of the song. Sampled are Ennio Morricone’s “The Man With The Harmonica” (soundtrack to Once Upon a Time in the West) and “Electric Counterpoint” composed by Steve Reich and performed by guitarist Pat Metheny. The voice is Rickie Lee Jones from a promotional interview. Reich was “flattered.” Jones sued.

Grimes also did the sound for It’s JerryTime’s video “B Train Blues.”

Way back in WFMU’s blog is an album that continues to dazzle me, Yann Tomita’s Doopee Time. Sez Station Manager Ken:

Here’s a strange and wonderful record called Doopee Time by the Japanese composer and experimentalist Yann Tomita. Trying to describe this record (or Tomita) is difficult – part muzak, part dada comedy, part I Dream of Jeannie, with a running commentary by The Doopees, two Japanese doll women named Suzie and Caroline.

All the Doopee mp3s are up at WFMU; here’s a few of my faves:

“The Professor” (formerly of WFMU’s Audio Kitchen) now curates an online museum, The Audio Kitchen blog, where you can listen to “Found Sound, Amateur Recordings and Homestyle Noise,” read about the tapes’ content, where they were discovered or created, and how to submit and discuss similar recordings.

For instance, here’s some found Answering Machine Recordings. These days our missed calls are recorded on digital voice mail, but not long ago we recorded our missed calls on cassettes, The Audio Kitchen dispenses this outdated technology to display many interesting and somewhat amusing glimpses into peoples lives.

There are mounds of found sound and recorded messages the Professor has documented and is sharing with everyone that cares to look and listen. He also hosts The Radio Kitchen, Adventures in Amplitude Modulation:

“The Radio Kitchen is a blog about lo-fi old fashioned terrestrial radio broadcasting using amplitude modulation (on medium wave and the shortwave bands). You’ll find that most posts actually contain audio files relevant to the subject matter discussed in each entry, while others may concern radio topics: radio reception, audio archiving, and general news related to AM and shortwave radio broadcasting.”

Jason Cady and the Artificials experiment with opera. The following piece is in five parts, Overture, Recitative, Aria, Recitative II, and Finale. The two Recitatives are priceless: they are operatic renditions of everyday conversations, recorded by the composer. “Recitative” (at 2:10 into piece) is about how folk from Michigan say “m’Bye.” Recitative II (at 6:10) dialogs on the dictionary definition of “resplendent.” Jason Cady and the Artificials, “Post-Madonna Prima Donna” (9:35 mp3):

Jason Cady talks about his compositions on the podcast Sound Speaks for Itself.

Was listening to Lukas on KGLT this weekend playing all kindsa insane and inane Xmas-isms. Called him up and he pointed me to Otis Fodder’s three free mp3 free collections, Holiday Freak Out & In. I knew the Otis’ name from his 365 Days Project. But didn’t realize, till Lukas, informed, he’s also the music sampling phenom The Bran Flakes.

Holiday Freak In 1 includes one of the best Christmashups ever; it’s Corporal Blossom assembling bits of Satchmo, Elvis, Bing and The Supremes all wishing for a “White Christmas” (3:19 mp3):

The song first appeared on the Illegal Art compilation A MUTATED CHRISTMAS. 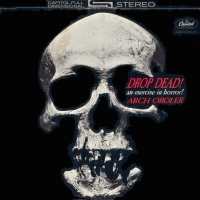 Just in time for Dias de los Meurtos, the 365 Days project has posted mp3s of Drop Dead: An Exercise in Horror, an LP by ol’ time radio innovator Arch Oboler (Lights Out). Track 1 is an “Introduction To Horror” (2:34 mp3): 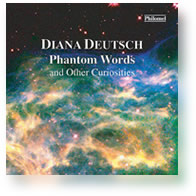 It’s an intervu w/ music-psych prof Diana Deutsch about the “series of striking auditory illusions and curiosities of sound perception” found on her CD Phantom Words and Other Curiosities. 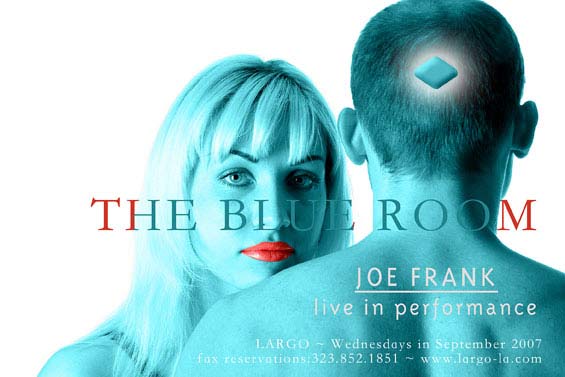 Don’t know who the 2 folk are in above poster for Joe’s show; but between that lady’s lips and the guy’s diamond brain embed, well, how can anyone in LA county not attend?

Laurie Anderson has a new song (“Only an Expert” @ Lincoln Ctr), if indeed something by her can be “new,” cuz it still sounds like Laurie Anderson which ain’t a new sound. But, hey, I’m still a half-a-fan, so I’ll post something old that sounds new and looks great, the “Sharkey’s Day” vid by Laurie Anderson:

inogolo: English Pronunciation Guide to the Names of People and Places— “the practical, easy-to-use website devoted to the English pronunciation of the names of people, places, and miscellaneous stuff. The site contains a searchable database of names with both phonetic and audio pronunciations in English.”