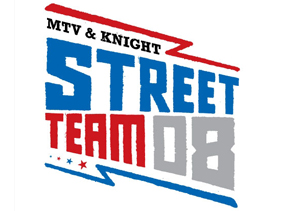 “MTV’s Choose or Lose and the John S and James L Knight Foundation present Street Team ’08: 51 state-based citizen journalists covering election ’08 from a youth perspective. Armed with laptops and video cameras, and charged with uncovering the untold political stories that matter most to young people in their states, they will submit weekly reports online and via mobile.”

“We hope to find out whether or not our most important political event — the election of a president —matters to young people, and whether or not if matters more when it comes to them through the lens of their issues and the screen of their cell phone,” said Eric Newton, vice president of journalism at the Knight Foundation. “We also hope to find out what important youth issues are being overlooked by traditional media as the Street Team coverage goes beyond the presidential horse race.”