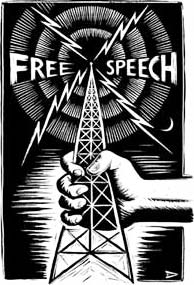 “In a crisis grow. That’s the only creative possibility, take a risk and expand.” —Lew Hill

Lewis Hill co-founded Pacifica Radio (then KPFA & WBAI), based on “The Theory of Listener-Sponsored Radio.” In this taste of his 1951 treatise, he describes the commercial broadcast and how it differs from his new idea of a non-commercial radio:

Let me instance the announcer, not only to seize the simplest case, but because he will serve as the gross symbol for the writer, the musician, and all who try to make a living in the program end of radio. You will recall without difficulty, I hope, this fellow’s nightly solicitude toward your internal organs. In his baritone way he makes a claim on your attention and faith which few of your closest friends would venture.

I know of no better explanation of this man’s relation to you, to his utterances, his job, and his industry, than one of the time-honored audition tests given to applicants for announcing jobs at certain of the networks. The test consists of three or four paragraphs minutely constructed to avoid conveying any meaning. The words are familiar, and every sentence is grammatically sound, but the text is gibberish. The applicant is required to read this text in different voices, as though it meant different things: with solemnity and heavy sincerity, with lighthearted humor, and of course with “punch.”

If his judges award him the job and turn him loose on you, he has succeeded on account of an extraordinary skill in simulating emotions, intentions and beliefs which he does not possess. In fact the test was especially designed to assure that nothing in the announcer’s mind except the sound of his voice–no comprehension, no value, no choice, and above all no sense of responsibility–could possibly enter into what he said or what he sounded like. This is the criterion of his job.

The significance of this situation is strangely neglected, as I have said, although the commonplaces of industrial life that best explain it are much discussed. We all know, for example, that the purpose of commercial radio is to induce mass sales. For mass sales there must be a mass norm, and the activity must be conducted as nearly as possible without risk of departure from the norm. But art and the communication of ideas–as most of us also appreciate–are risky affairs, for it can never be predicted in those activities just when the purely individual and abnormal may assert itself. Indeed to get any real art or any significant communication, one must rely entirely on individuals, and must resign himself to accept not only their uniqueness but the possibility that the individual may at any time fail. By suppressing the individual, the unique, the industry reduces the risk of failure (abnormality) and assures itself a standard product for mass consumption.

We know these commonplaces, but it is truly staggering to contemplate what they imply and cause in American radio. Should you inquire why there is no affinity between the serious arts and radio, you will find that this is the reason.

America is well supplied with remarkably talented writers, musicians, philosophers, and scientists whose work will survive for some centuries. Such people have no relation whatever to our greatest communication medium. I have been describing a fact at the level of the industry’s staff, it is actually so notorious in the whole tradition and atmosphere of our radio that it precludes anyone of serious talent and reasonable sanity from offering material for broadcast, much less joining a staff. The country’s best minds, like one mind, shun the medium unless the possessor of one happens to be running for office. Yet if we want an improvement in radio worth the trouble, it is these people whose talent the medium must attract. The basic situation of broadcasting must be such that artists and thinkers have a place to work–with freedom. Short of this, the suffering listener has no out.