The IED explosion happened in the morning, 1200yards from where I was walking to get a breakfast falafel at the police station. The boom was deep, not like fireworks from the sky, but a percussion from the ground, the earth wounded for a moment, insulted. I could not control an ‘oof’ as air was punched lightly out of me.  Gunfire followed, the Iraqi Police firing into the air to disperse crowds and let them know they’re there — security?

Iraqi police and American MP’s had been up all night in preparation for a Shiite Pilgrimage called Ashura. Boom. Not allowed to be practiced under Saddam, the devout whip and cut themselves in observance, faces covered in blood, white shirts crimson with the owner’s blood, of the very devout, when things go right.

The explosion was near a Mosque on the route.  I had walked that route at 3am with soldiers, either we missed it or it was planted after us, I like to think it was planted after we passed, can take only 1.3min to place, Iraqi police are known to sleep at their posts.  Some of the devout are now dead in a deep disruption of earth, air and peace; many are covered in blood, not by their own hands, maybe not their own blood.

The devout bleed, the devout weep.

Back at the station, wearing my armor because I still want to get breakfast, Iraqi Police, knowing I’m there to take photos, “Want photo?” one asks, making a contorted dead face, “go hospital, many photo,” he is smiling, I don’t know why.

I’m sorry, I wish I had seen the bomb on our patrol, it was near a bridge, it was dark, I remember the bridge, I feared walking under it, bridges are where bad things happen, I didn’t look for bombs, it’s not my job, I don’t know what to look for, I am not trained, I was told to stay near walls, or in the middle of the patrol of soldiers, if the patrol leader holds his hand down in a certain way we were to get on one knee, I did not look for things out of place, I concentrated on not stepping in sewage water seeping from canals, I did not use a flashlight because I didn’t want to be seen by a sniper, instead I fiddled with my recorder, I increased the ISO of my camera, I did not look at the side of the road unless an angry stray dog was threatening, the soldier near me aiming his pistol at it just in case, they protect me, I did not see a bomb, I wish I did, I’m sorry, I’m here to observe but It was dark, I did not see, it may not have been there yet. 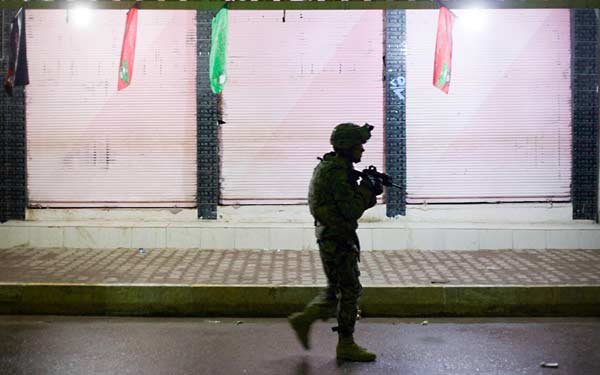 […] I felt very safe most of the time as I was mainly in secure bases. The closest to danger I got was one morning at an Iraqi police base: An IED blast 1200m away forced an “oof” from my body and my soul; five civilians died, seventeen wounded. Can read about that day here. […]