From the End of the World – Patagonia

The race started, like all good races, with a bang – this particular bang came from a Chilean policeman’s pistola. The beach was empty of teams long before the bullet fell God knows where. Getting to this point however was far from easy.

Everyone, including the first rays of sunlight, gathered in the town’s Central Plaza to board a fleet of buses…buses we would get to know very well. Many of us had already survived the greatest danger of the day…a frenetic ride in local taxis. We watched our last city sunrise for many days and packed into the tour coaches for transport to the kayak launching point and the official start of the race. The early hour muted some of the excitement as racers settled-in. Highly engineered socks started poking up from reclined bus seats by those achieving curious pretzel-nap poses only possible on chartered transports. Lumbering down the highway I watched the scenery change from graffiti-peppered buildings to industrial brick-making plants to just lots of plants being nibbled on by sheep. Lots of sheep. Then the vast nothingness of land, of that something we’re here to traverse and treasure.

We arrived at the ferry dock and got off the buses. Then we got back on the buses to drive a short distance to the (intended) starting spot. However, there was a bit of a breeze. A very strong breeze. Let me be honest: it was a ridiculous wind holding at 40 knots which caused two-meter swells in the middle of the channel causing most of us to frown, many to fear, and the brave ones to say, Yes! But the navy, who would have to be the ones to rescue those who might say oops shortly after saying Yes! said, No (which in Spanish also means No).

As we waited on the beach, yoga masters Chelsey Gribbon and Jason Magness of team GearJunkie.com performed warm-up yoga stretches on each other much to the glee of the photographers who swarmed around them and, who at that moment, seemed to outnumber race participants. There’s a lot of media glass glinting in the sun, if there were sun. The weather was worsening, so it was back on the bus to take the ferry across instead of paddling. But not so soon: it was back off the buses so they could board lighter. Same for docking on the other side. A few of us truly brave souls ate microwaved hot dogs from the little, very little, shop on the boat. Dolphin-looking sea life swam alongside, I don’t know their names, I’m sure there are photos somewhere. 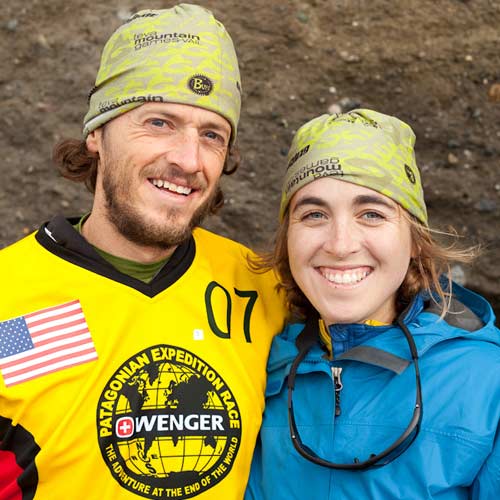 Then, yes, it was back on the bus to begin the race just down the road. The Japanese team, I noticed, had the biggest smiles and bluest pants (probably no connection). The GearJunkie folks fiddled with their gear. All the racers telescoped out their walking poles, the whole affair sounded like soldiers locking and loading their weapons before battle. And battle it was: even walking down-hill was a challenge in the increasing wind that lifted sand and blasted our faces, no amount of chap stick was enough this morning.

A valuable bit of advice was dispensed:

Stay on the beach. Tide’s coming in, but inland, up there (he points), there are mines…?Cómo se dice?…landmines…STAY ON THE BEACH.

So the choice was possibly getting your feet wet, or having them blown-off, is this why whistles are a required packing item?

Little did we know we were the last ferry before the storm forced even these mighty beasts to weigh anchor and wait it out. Unfortunately (this is something only I as an ‘embedded journalist’ know) the truck with the bulk of our food has yet to make the passage. Oops. I’ll leave our coordinates and appeal for international aid. Till then, the race is on.