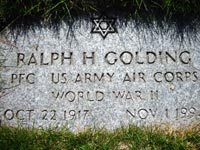 People near the process of death and dying:

It takes four seconds to hit the water from the Golden Gate Bridge. A year ago the producer’s friend Phil took that fatal jump. They met several years before that when Phil’s brother committed suicide (transcript).

Writer Carmen Delzell visit her grandmother, who broke her hip — not uncommon, says the doctor, for an 89-year-old.

Scott Carrier talks to the family, the ex-husband, the mortuary, the doctors, even the grave digger, in piecing together the memory of a life. Prodcued for New American Radio. (Scott’s most recent book is Prisoner of Zion.)

Messages on my the producer’s mother’s tape machine, found after his father’s death; original music by Skyward

. This Kaddish is a mourner’s prayer.