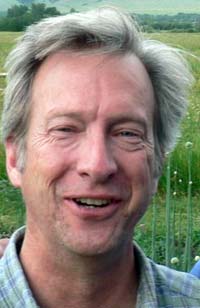 [Brady Wiseman is a friend, programmer, state legislator for my hometown of Bozeman, and a Big Picture guy. We previously posted a couple clips from an intervu w/ him. I think people should hear what he has to say; so here’s the audio and transcript of the long vers…]


Transcript: My name is Brady Wiseman. I am a software engineer by profession. I live in Bozeman, Montana. I have a hobby which is serving as a citizen legislator in the Montana Legislature. So I’m spending the next four months in Helena, Montana acting as a public servant as a member of the Montana House of Representatives.
As people become less and less well off, as our standard of living continues to decline, people will self-organize into different modes of economic activity.
I believe that the economic catastrophe were in is a five act play and we’ve just come to the close here in early January, 2009, we’ve come to the close of Act One. We’ve got four more acts to go and it’s a tragedy. So, as it plays out, the ability of the National government to change itself will become apparent as being inoperative.

National politics is not subject to change because there are too many powerful forces behind it. So the change is gonna come from the grass roots. As people become less and less well off, as our standard of living continues to decline, people will self-organize into different modes of economic activity. And it won’t be directed from the top, it will simply happen from below.

And we still, at this point, have a wonderful advantage and that is the existence of the Internet to help transfer the knowledge of grass roots change, self-organized change happening in one place to another. And, so, we may be able to see a sweeping difference in how America operates, quite rapidly, but it will happen from the bottom, I believe, and not from the top.

Wall Street has their people in place in the new Obama Administration. It’s the same people who developed the system in the Clinton administration that is now collapsed.
The Obama Administration, right now, is committed to maintaining the status quo and they have proven themselves to be the servants of Wall Street, already, before even taking office, they had proven themselves to be the servants of Wall Street just like every Administration before them, going back to Franklin Roosevelt, who was the last President to buck the powers that be because they fell flat on their face and he was able to. He had to.

Well, if they fall flat on their face now , they still have control over events. They have their people in place in the new Obama Administration. And I don’t have to say the names, the names are well known. But it’s the same people who developed the system in the Clinton administration that is now collapsed.

How do we heat our homes? How do we turn on the lights? How do we put food on the table? These are the essential problems of life and they are becoming more and more apparent as the remaining four acts of the five act play play out.

There is no chart for the waters that we’re in now. There’s no map for the territory on the other side. That’s where the self organization come in. People will simply cope. When the Soviet Union collapsed, there was nobody there to tell the people how to take care of themselves but they did. They managed it, they figured it out and I believe as things continue to decline — and economically I’m convinced they will — then our people will figure out how to make things work for themselves. And my job is to help that along as well as best as I am able from the level of State government. END_OF_DOCUMENT_TOKEN_TO_BE_REPLACED

We’re all looking forward to this week’s economic news.

No, not what Congress does; I’m talking about the upcoming This American Life episode: “Another Frightening Show About the Economy.”

Listening to the two’s work on the new NPR Planet Money podcast and blog reminded me how damn good they are. AdamD‘s the econ extraordinaire guy for NPR. And AlexB of TAL and NPR, well, I gotta ask…

Is Alex Blumberg the best reporter on the planet?

His little asides make a story, like from this report on SEC Chair Chris Cox and the stock-trading practice of Naked Short-Selling:

“It gets confusing, as it often does, when you get to the naked part.”

“Fannie Mae and Freddie Mac, despite having names a child might give a puppy, are… well, were…”

And there’s this AlexB blockbuster: “What’s In A Number?” The TAL topic was a report on Iraq civilian casualties. Alex transformed it into an insightful portrait of both the science and humanity in statistics.

A recent NY Times article,  “Daring to Say Loans Made No Sense,” is devoted to TAL’s “Giant Pool:”

“Market appetites for anything that resembled a mortgage pushed loan standards down: ‘No income, no asset. You don’t have to state anything. Just have a credit score and a pulse.’ (Mr. Blumberg pointed out that the pulse thing was optional: 23 dead people in Ohio were also approved.)”

Found none. But along the way did run into lotsa illuminating info. What follows is an audio and url annotated travelogue of my trip thru the web. END_OF_DOCUMENT_TOKEN_TO_BE_REPLACED

[Mr. Massett explains why the media explanations of the mortgage crisis explain nothing.]

When the US credit markets began to blow up last year, every newspaper in the country served up two explanations for the mess: “sub-prime mortgage” and “collaterized debt obligation,” or “CDO.”

A sub-prime mortgage sounds bad on the face of it, so no problem there. But CDO has no obvious meaning. Only a few days ago I watched an NPR journalist try to figure it out from the words themselves (“let’s see, ‘collateralized’ refers to ‘collateral,’ so there must be a thing like a house or a car someplace, and ‘debt’ means, well, debt, and an ‘obligation’ means, um, you have to do something, right?”) The usual fudge is to drape the riddle with adjectives like “opaque,” “complex,” and “hard to understand,” as if these were explanatory principles. The phrase “complex and opaque financial instruments known as CDO’s” doesn’t tell you anything, really, but at least it sounds bad. Dern near as bad as a sub-prime mortgage. Moving right along, in other news…

The trouble is CDO’s were never meant for the average investor, or the average journalist. They are Wall Street inventions designed for the big players, investment banks like Citi or Merill or Bear Sterns. To understand them you have to think like an investment bank. This is no harder than thinking like a Martian. END_OF_DOCUMENT_TOKEN_TO_BE_REPLACED