Joe Frank is what radio in its wildest dreams wishes it could be.
—Harry Shearer

Joe Frank died January 15 2018. Many good radio producers got good, in part, by tuning into Joe transmitting his nighttime radio tales. Below are a few of his Frank-enstories in short films and broadcasts.

I remember sitting in one of NPR’s old first-floor studios on M Street in Washington, listening to Joe as he recorded a monologue, feeling all caught up in everything he was saying, wondering what would happen next in the story, transported in a way I’d never felt before listening to the radio. I wondered how he did it. I wanted to do it myself. Of course I’d listened to lots of radio before that, but I’d never heard anyone tell a story on the air that was actually truly can’t-turn-away think-about-it-for-days-after compelling.
—Ira Glass

I was driving in my car and a radio drama was in progress. The moment I heard it, I knew, This is a radio drama. These are actors reading scripts! This is bullshit! I didn’t even want to listen to it. I thought, I would never want to do anything resembling this kind of work. What I want to do, and this is a big word, is transcendent stuff. Material that is unscripted.
—Joe Frank, Believer interview

Joe was the best storyteller I have ever heard. He was one of a very few artists who could comfortably wear the mantle “genius.”

Joe was a fabulous fabulist. Some of his dark fantasies were inspired by real events morphed into fiction. Most were original products of his febrile brain, beautifully rendered in audio masterpieces. Joe’s collected work is available on his website, JoeFrank.com. Rent-A Family is one of my favorites.

Joe was my friend and confessor, as I was his. One of many, I suspect. I could tell him anything, my darkest secrets, knowing that he would use them as fodder for his dark tales.

In 1983, I presented Joe with a Lifetime Achievement Award from Third Coast. He made a joke about getting a lifetime achievement award while he was still alive. In fact, Joe had another 35 years of brilliant writing and production ahead of him.

He never stopped working. Fragments of his last writings are on his Facebook page. Here’s a sample:

My wife and I went to a therapist. He said that in our marriage I behaved like a frightened forest animal. I was embarrassed. When we came home, I stopped expelling the noxious odor from my anus, removed my quills, and struggled against the compulsion, when my wife entered my study, to assume a frozen stance to blend into the environment. One evening, when she was typing, she didn’t realize I was the canvas chair she was sitting on. I looked out through the window, which was full of crucifixes, the painting of an old woman with a large deformed penis, myself engraved on a playing card. I was back at the point when I first discovered I was lost. I wanted to pack my bags, but I didn’t want to leave before I knew I’d failed here.

Joe’s amazing wife, Michal Story, kept him alive with a combination of love, tough love, and stubborn persistence, when some of his doctors gave up on him. She worked to near exhaustion. Michal’s day-by-day account of her saga should be turned into book, Oh How I Loved This Man.

Michal has raised $ 124,000 to date on GoFundMe, to pay Joe’s medical expenses not covered by insurance . Please click on this link, donate as much as you can, then read Michal’s day-to-day account of her rollercoaster ride to keep Joe alive. Start of the bottom of the thread.

Joe was a double survivor, of the Holocaust and decades of illness. He was born in Strasbourg, France, August 19, 1938. His parents escaped Germany only a year before it was nearly impossible for Jews to leave.

Joe started his radio career in 1976 at WBAI, New York. Following a brief stint as host of NPR’s Weekend All Things Considered, then on NPR’s Options. Ira Glass was Joe’s production assistant. He credits Joe as a major influence. In 1986, Joe decamped to KCRW, Santa Monica.

Joe produced over 200 hours of brilliant radio at KCRW in an often stormy partnership with Ruth Seymour, KCRW’s General Manager — muse, patron and often harsh critic of the radio artists she adopted, including the undersigned. We were both fired and re-hired by Ruth more than once. It must be said that Ruth created the most compelling, the most original public radio station ever. Ruth was also a radio artist, her canvas was a radio station.

I was astounded by the depth of his creativity, his command of the English language, his ear for audio and music and his dogged perfectionism. Often tape had to be torn from his hands to make it to air on time.

Joe used his talents to create a unique radio persona, and a body of work that will survive so long as machines exist to play his recordings. 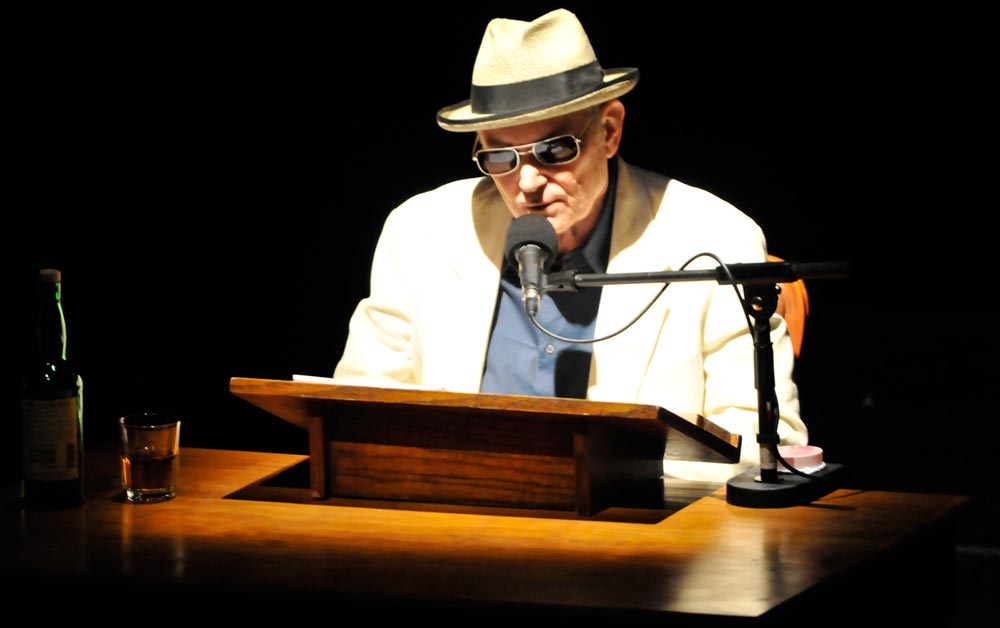 Stop at nothing to get the best work that you can get. Betray, violate, cause enormous harm.
—Joe Frank

In 2011 we produced a Hearing Voices hour under the influence of radio maestro and master storyteller Joe Frank, featuring many of his sonic co-conspirators, including David Cross (Fox “Arrested Development”), Laura Esterman (ZBS “Ruby”), Larry Block (PBS “Sesame Street”), and Grace Zabriskie (“Twin Peaks,” HBO “Big Love”). Deep and dark does not begin to describe the solitary, ponderous melancholia that is a Joe Frank story. END_OF_DOCUMENT_TOKEN_TO_BE_REPLACED