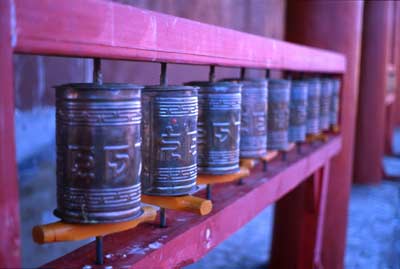 Nearly 800 years ago, a powerful army swept across China and Central Asia. Surviving on the milk, blood, and meat of their horses, they reduced great cities to wasteland. They turned farm fields to desert, poured molten silver in the eyes of one enemy commander, and even threatened the Pope. At the height of their conquests, the great Khans controlled the largest land empire in recorded history, spanning from Korea to Hungary, Vietnam to Syria. They had sent spies into Venice and Vienna, when they suddenly vanished, returning to their homeland, the vast steppe of Mongolia.

It’s October, six months into this music recording odyssey, I step off a Russian train to find myself in Ulaan Baatar, the modern day Mongolian capital. It’s a cold blue morning. A bowlegged man leads a horse through city traffic. Street vendors shiver in their kiosks and restaurant signs bear the face of Genghis Khan, or Chinggis, as he’s known here. 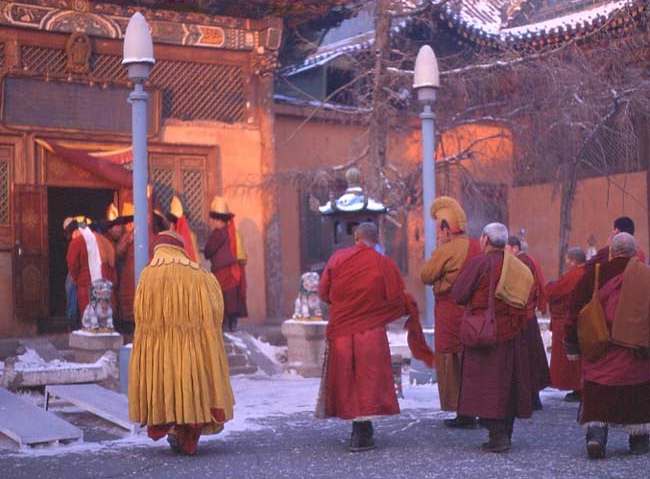 I walk to the Ganden Monastery, on the outskirts of town where the Soviet-era apartment blocks fade into camps of gers, the circular felt tents of the Mongolian nomad.

The monastery courtyard is surrounded by prayer wheels, engraved with Tibetan script. I’m greeted by a friendly monk, who’s standing in a swirling cloud of pigeons, feeding them. On a wooden platform above us, two young lamas blow smoothworn seashells as the sun rises.

The monk invites me inside. I wonder if good karma keeps him from getting shat on. I remove my hat, remember to walk clockwise, and do my best to be respectful. The prayer hall smells of incense and yak butter. Lamas chant from buddhist scriptures and parents hush their children.

The prayers are broken by a sudden cacophonous blast of trumpets and percussion. This is called Tsam, which a monk describes to me as the sound of god. It’s a call to awaken listeners from their illusions. Sort of a spiritual alarm clock, I’m thinking.

When Chinggis Khan first united the Mongol tribes in the early 13th century, his people practiced shamanism, similar to some Siberian and Native American traditions. We usually remember him as a cruel and cunning military general, but Chinggis also established a written language in Mongolia, a legal code, and a culture which tolerated many religions. His grandson, Kublai Khan, had advisors who were Christian, Muslim, Jewish, Confucian, and Taoist; but he became partial to Buddhism when, as the story goes, a Tibetan lama caused a wine glass to rise unaided through the air to the Khan’s lips.

In 1578, in the midst of a crumbling empire, Altan Khan established Tibetan Buddhism as the official state religion — strange since he was at war with Tibet at the time. Upon the spiritual leader, Sonam Gyatso, he bestowed the title Dalai Lama, meaning “ocean of wisdom.”

This may have been a political move, but by then the Mongolian people were already blending Buddhism into their shamanistic rituals. At the time of the communist takeover in the 1920’s, monasteries controlled one-fifth of the nation’s wealth and it was customary for one son in every family to become a monk. But the Soviet-backed government killed thousands of monks, and “re-educated” thousands more. Of over 700 monasteries, only four survive today. 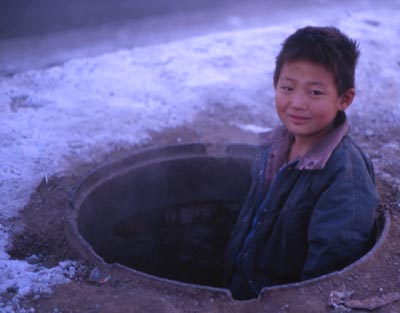 Walking out of the Monastery, I spot a small head peering out from a sewer vent. The boy yawns and surveys the morning traffic. His face looks frostbitten. The winters here are severe, so street kids find shelter and warmth in the city’s underground sewer system. They sleep on cardboard beds draped over the hot water pipes. The fall of communism in 1990 gave Mongolians back their religion, but without a social welfare program, 4000 homeless children now roam Ulaan Baatar. There are several internationally funded orphanages, but many kids prefer the freedom of the streets.

I hand the kid a few togrog, the local currency, and head off to meet my friend and translator Baagii. We’re recording a musician who plays the morin khoor, or “horse fiddle.” It looks a little like a two string cello.

Legend tells of a herdsman who rode a winged steed. They would fly over the vast steppe, and the wind in the horse’s mane would sing rich melodies. But the horse was killed by a jealous witch. The grieving shepherd built the first morin khoor out of the bones and hair of his dead companion, so that he might continue his song.

The eerie tone is called Khoomi, or throat singing. The singer produces overtones that can resonate deeply or whistle, depending on the tension of the vocal cords. An old man who sits in on the session tells me some shamans use these high overtones to represent a contact with the spirit world, while the bass note maintains a physical presence on the earth.

I ask Baagii why drums are seldom heard in secular Mongolian music. He says Mongolian songs sound best when sung on horseback, the drums are found in the rhythm of a horse’s hooves.

Baagii and I spend a few weeks in the countryside on horseback. I’m not a skilled rider but my horse is patient. Like most Mongolians, Baagii is a fine horseman, and gallops as if he and the animal were one. Falcons glide silently beside us as we pass through desolate landscapes and grand expanses of bare earth and sky. The melodies of the morin khoor seem to echo in the horizon. Signs of civilization are few and far between; there’s something satisfying about being lost in places with no roads. 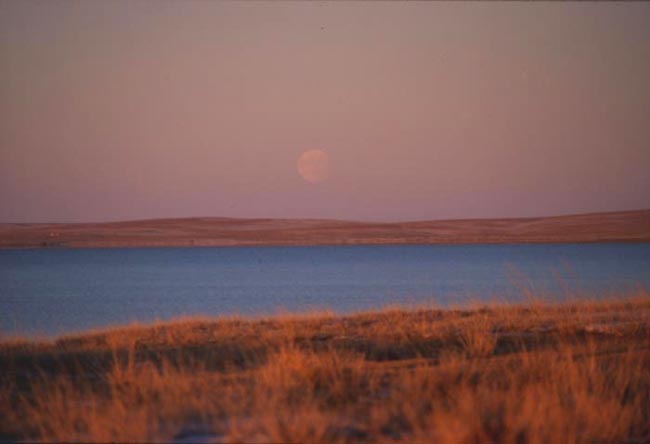 At the top of each mountain pass, Baagii stops to place rocks on an ovoo, a cairn honoring of the spirit of the pass. Blue silk scarves have also been left here as offerings to the sky. Before going to battle, Chinggis Khan would pray on a hilltop to the spirits of heaven. It was the sky that protected his armies as they rode through foreign territory.

Private land ownership does not exist in rural Mongolia, a philosophy that predates communism. The people out here are nomadic shepherds, migrating several times a year to new pastures. They graze their herds and collect dung for fuel. To me they don’t seem too concerned with the modern world, until I notice some gers with solar panels and generators for radios. One family even has a satellite dish and television, which they move, along with the ger, by camel caravan.

We ride into a valley with a derelict Soviet factory and the neglected walls of the Erdene Zuu Monastery. We camp outside the town, but I can’t sleep. Above us is an immense canopy of stars. Around us, a barren valley, once the city of Karakorum. This was the capital of Chinggis Khan’s immense empire. Now you can’t tell it ever existed.

The next afternoon we meet a father and son on horseback. We help them herd their yaks, and they invite us back to their ger. It never ceases to amaze me how the poorest people are often the most friendly and hospitable. They seem too humble to be the descendents of brutal warriors.

That night, an old woman with grand eyes offers us bowls of fermented horse milk. We dine on horsemeat, right off the bone. I don’t know how I can look my own horse in the eye tomorrow. The husband’s weathered face has hardened into a grin. He tells us he’s happy to own his own herd. He thinks this winter’s grazing will be difficult. The zuud, or blizzards, of recent years have killed millions of livestock. The old man says the zuud are caused by woodland spirits, angered by logging and industrial pollution.

Tomorrow he’s going hunting for bear, but says he’ll settle for marmot. Baagii licks his lips at the thought of roasted marmot. I’m not so sure. An outbreak of bubonic plague from an undercooked marmot has quarantined the nearby town of Tsetserleg. It’s thought that the Mongols once introduced the black plague to Europe.

Still Baagii insists that marmot is a delicacy. I continue chewing my leg of horse, and realize I haven’t seen a vegetable for weeks. The old man praises our horses and says it’s good we’re travelling this way, like Chinggis Khan, he winks.

He pours us each a bowl of paint-stripping vodka, and we make offerings with ring fingers dipped and flicked to the earth, wind, and sky. We drink, and then he challenges us each to arm wrestle. After a few humiliating rounds, I take out my guitar, and Baagii sings this song…

The lyrics tell of a great horse who was sold to foreigners. After years in exile, the horse begins to miss the smell of the steppe and one night escapes his stable. Losing his strength as he gallops across the desert, the wind in his mane carries him home. Mongolians have a lot of love songs; most are about horses.

In the year 1277, Chinggis Khan’s body was carried to Burkhan Kaldun, a mountain in northeastern Mongolia, where as a youth he’d once escaped a vengeful tribe. Any unfortunate witnesses to this funeral procession were immediately killed, so that the grave’s location remains, to this day, a secret.

Today Mongolia is a poor sparsely populated country, nearly forgotten between the dominating neighbour-giants of China and Russia. But Chinggis is very much alive. Although the empire has faded, the surname Khan is still common throughout central Asia, and every Mongolian knows his legend.

Baagi and I reach the city of Darkhan, and hitch our horses outside an internet café. Inside the young descendents of the Mongol warriors battle each other on computer games. While I email friends and catch up on news from the empire I call home, I remember that the Mongols once decimated Afghanistan and Iraq. Outside, on the wall of a crumbling Soviet building, I see English graffiti. It reads “horseman.” The window panes have been painted blue, a bright shade, like the sky. 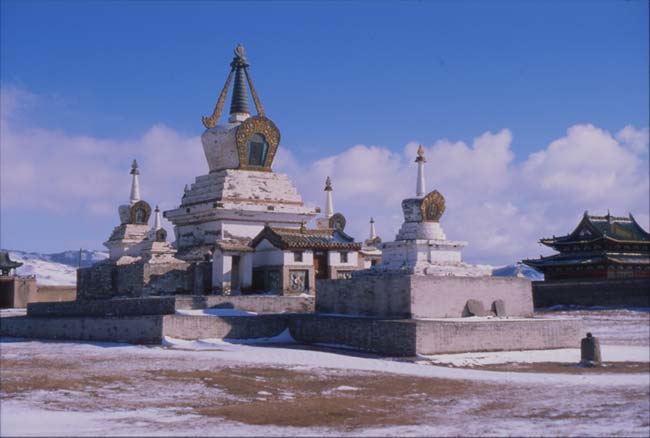 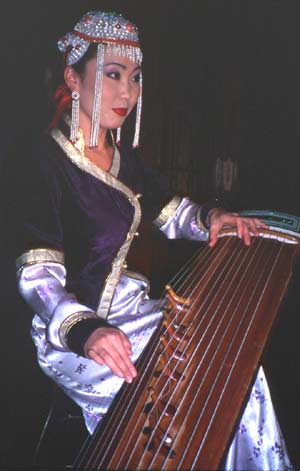