Travels of the self-propelled, bipedal and by pedal:

Part 1: A bike trip through Yellowstone and Teton National Parks, into windstorms, between snowbanks, and in the middle of a bison herd. Interviewees: Rick McAdam, Yellowstone Park Ranger; Geyser Gazers at Old Failthful; Kathy Urbigkit of Spin a Yarn, Dubois WY; Wolves in West Yellowstone MT.

The paving of America as seen from the shoulders and sidewalks of our country’s roads. Musings-in-motion recorded during a 5000 trek from Arizona to Georgia to Maine. “It is becoming illegal to travel this country by foot.” Music by Jeff Arntsen. (A longer version of this story is at Third Coast International Audio Festival.)

Bhutan is a land of prayer flags, Buddhism, and, like everywhere else: poverty, poor health, and domestic violence, Queen Ashi Sangay Choden Wangchuk believes her job is to increase the Gross National Happiness. To do that she treks into the most remote corners of the country, meeting people she’d otherwise never see, asking about their lives, helping them with health care issues, and working to end mistreatment of woman. Outer Voices accompanied her into an unmapped corner of the high Himalayas — they are the first foreign journalists invited to accompany a Bhutanese monarch on a trek, and to interview the Queen.

RENEW = Respect Educate, Nurture and Empower Women, “an organization dedicated to the empowerment of vulnerable women of our society so that they can emerge as socially and economically independent members of their communities.”

END_OF_DOCUMENT_TOKEN_TO_BE_REPLACED

HV’s Jack Chance did the sound for the Timothy Syrota video, documenting the 20K Burmese refugees who’ve recently fled to the Thai border:

Portraits of people fighting a plague:

South Africa has been hit hardest with H-I-V/AIDS. Five million people are infected (Avert: SA). One of them, Thembi Ngubane, at nineteen years old, carried a recorder in 2005 to document her life (NPR | PRX). Produced by Joe Richman, edited by Debra George and Ben Shapiro; more of Thembi’s story, with an audio-visual gallery, is at AIDSdiary.org.

December 1st is World AIDS Day. In the arts community it also had this other name, DWA.

Poet Kwame Dawes travels his native Jamaica talking about HIV/AIDS. This is part of the hour-program “Live Hope Love: HIV/AIDS in Jamaica” (PRX) Support came from the MAC AIDS Fund, of MAC Cosmetics, and from and PRX, the Public Radio Exchange. Produced by Stephanie Guyer-Stevens and Jack Chance of Outer Voices, for the Pulitzer Center on Crisis Reporting. Their emmy-winning muchomedia website for the project Live Lope Love.

END_OF_DOCUMENT_TOKEN_TO_BE_REPLACED

Here’s Chance’s more accurate Cyclone report w/ the other story, not being told: the Burmese elections. No one would run this, so we’ll post it, “Irawaddy Delta Blues” (5:10 mp3):
END_OF_DOCUMENT_TOKEN_TO_BE_REPLACED

I love it while traveling when an HV story comes on the radio. That happened a slew of times this past week (Mtn Gorrillas of Rwanda, Passover poem, Peace Rabbi). The first one I caught crossing the NV desert on NPR Day to Day. It’s another from Jack Chance, international man of trad music mystery…

The Kingdom of Nepal became a democracy this week, holding it’s first elections for representatives who will write the new constitution and are likely to abolish the monarchy. Chance speaks with a young musician in Kathmandu, Rubin Gandharba, whose songs (played on the Nepali sarangi) became a rallying cry for the Nepali Democracy Movement. The call Ruben the “Nepali Bob Dylan” (2:57 mp3): 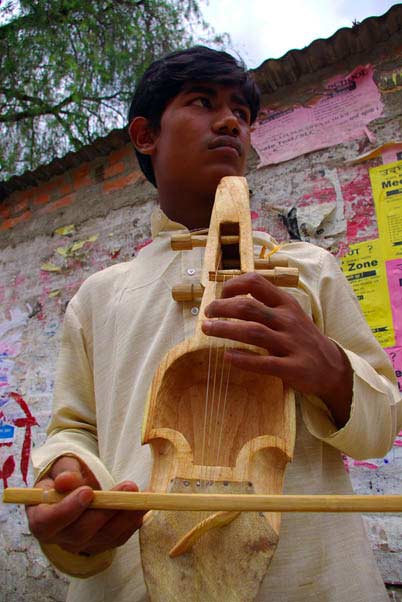