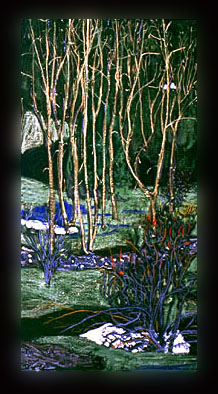 Artist Gennie DeWeese died yesterday. Anyone in the arts who ever crept thru our community (s.w. MT) was affected by her aesthetics. Her scrolls (like “Montana May” to the right; © Gennie DeWeese) were inspired. As was the period she put away her paintbrushes and painted instead with cattle markers, bought at ranch supply stores.

She and husband Bob were immortalized in Zen and the Art of Motorcycle Maintenance which Pirsig wrote after he, like the DeWeeses, taught here at Montana State U. Some excerpts from the book:

From where the deck disappears around the corner of the house, suddenly comes Gennie DeWeese with a tray of beer cans. She is a painter too and, I’m suddenly aware, a quick comprehender and already there’s a shared smile over the artistic economy of grabbing a can of beer instead of her hand, while she says, “Some neighbors just came over with a mess of trout for dinner. I’m so pleased.”

[and from a later conversation at the DeWeeses …]

“Did I ever talk about an individual named Phædrus?”

“He was an ancient Greek — a rhetorician — a `composition major’ of his time. He was one of those present when reason was being invented.”

“You never talked about that, I don’t think.”

“That must have come later. The rhetoricians of ancient Greece were the first teachers in the history of the Western world. Plato vilified them in all his works to grind an axe of his own and since what we know about them is almost entirely from Plato they’re unique in that they’ve stood condemned throughout history without ever having their side of the story told. The Church of Reason that I talked about was founded on their graves. It’s supported today by their graves. And when you dig deep into its foundations you come across ghosts.”

“You should write all this down,” Gennie says.

I nod in agreement. “I’m thinking about a series of lecture-essays…a sort of Chautauqua. I’ve been trying to work them out in my mind as we rode out here — which is probably why I sound so primed on all this stuff. It’s all so huge and difficult. Like trying to travel through these mountains on foot.

“The trouble is that essays always have to sound like God talking for eternity, and that isn’t the way it ever is. People should see that it’s never anything other than just one person talking from one place in time and space and circumstance. It’s never been anything else, ever, but you can’t get that across in an essay.”

“You should do it anyway,” Gennie says. “Without trying to get it perfect.”

“Well, it isn’t just art and technology. It’s a kind of a noncoalescence between reason and feeling. What’s wrong with technology is that it’s not connected in any real way with matters of the spirit and of the heart. And so it does blind, ugly things quite by accident and gets hated for that. People haven’t paid much attention to this before because the big concern has been with food, clothing and shelter for everyone and technology has provided these.

“But now where these are assured, the ugliness is being noticed more and more and people are asking if we must always suffer spiritually and esthetically in order to satisfy material needs. Lately it’s become almost a national crisis…antipollution drives, antitechnological communes and styles of life, and all that.”

Both [Bob] DeWeese and Gennie have understood all this for so long there’s no need for comment.
–© Robert M. Pirsig Zen and the Art of Motorcycle Maintenance

Many of us remember the DeWeese gallery which showcased dozens of Montana’s finest artists. Best wishes to Gen & Bob’s ridiculously talented family. Boatloads of us here in Bozeman are gonna miss ya, Gen. 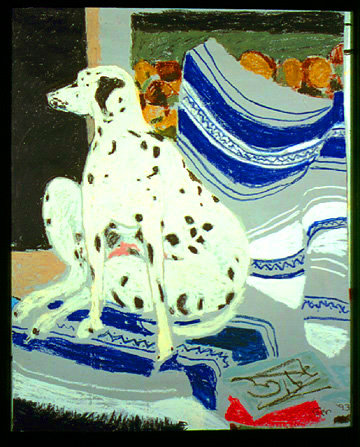 Gennie will be thought of as a living entity…she never left and the same said of Bob. He used to come to my gigs (I am a jazz bassist) and not leave without leaving me a napkin w/ his nightly impression of my dastardly contortions on it. Gennie has continued to attend my shows and she has always made it possible to go to the highest place with the music…knowing that her smile read as volumes. Thanks, Gennie for every minute.