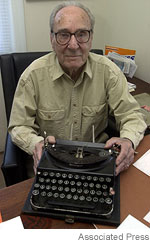 There were 39,827 people there and they had paid $342,497 to be there and when Graziano’s head came up out of the dugout they rose and made their sound. The place was filled with it and it came from far off and then he was moving quickly down beneath this ceiling of sound, between the two long walls of faces, turned toward him and yellow in the artificial light and shouting things, mouths open, eyes wide, into the ring where, in one of the most brutal fights ever seen in New York, Zale dropped him once and he dropped Zale once before, in the sixth round, Zale suddenly, with a right to the body and left to the head, knocked him out.
–The Day of the Fight, 1947