A few months ago Julián told me that things had calmed down, the killing was over. The next day there was a record setting 18 executions.

CIUDAD JUAREZ, Mexico — Two disabled police officers who were part of a special unit to help the handicapped were shot dead while on traffic patrol in northern Mexico, an official said Saturday.

Unknown assailants opened fire on the men from a car at an intersection in the northern city of Chihuahua on Friday, said state Public Safety spokesman Carlos Rodriguez.

Tirso Reza, 50, and Jose Luis Paez, 47, worked for a police unit dedicated to helping disabled people, including by ensuring that parking spaces designated for them were not illegally occupied. Reza used a wheelchair, while Paez had extremely weak eyesight.

Investigators did not know why they had been targeted, Rodriguez said.

Mexico is suffering a brutal crime wave as drug gangs step up attacks against rival groups and police. Soldiers and federal police have been waging an offensive against cartels for two years, but decapitated bodies regularly turn up in public.

On Saturday, a judge ruled that three men detained in a September grenade attack will stay in jail pending trial, according to the Attorney General. The men allegedly threw grenades that killed eight revelers at an Independence Day celebration in the city of Morelia.

Prosecutors say Julio Cesar Mondragon, Juan Carlos Castro and Alfredo Rosas belong to a group of Gulf Cartel hit men known as “Zetas.” In a video distributed by prosecutors days after the Sept. 15 attack, Castro tells an investigator their aim was “to frighten and provoke the government.”

But the defendants’ wives said their husbands had been in the port city of Lazaro Cardenas, 250 miles south of Morelia, on the day of the attacks. They said the men had been kidnapped and tortured into confessing by unknown gunmen who turned them over to authorities. 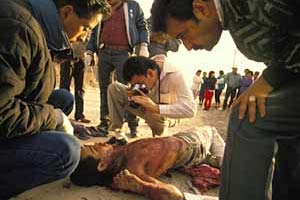 Investigators document the body of a man stabbed to death
on the boundary of two gang territories on the west side of Ciudad Juarez.
(Photo © Julián Cardona)

The media is reporting that the executions in Juárez are being done by warring cartels, but many people on the street told us they think the army is directly involved in at least some of the murders. But then when it comes down to it, nobody knows for sure and will never know for sure.

There is a common story, told by witnesses who will not go on the record, and so perhaps it isn’t true. But the story is that the assassins arrive in SUVs with shaded windows and no license plates. They wear black clothes and black ski masks and carry automatic rifles and pistols. They position themselves around their target in disciplined and practiced manuvers. And they show an excess of force, using dozens of bullets to kill a person. These men travel the city at night without being pursued by the police — because they kill police, the police are afraid of them. Everybody is afraid of them, and most people we spoke with in Juarez do not believe they can be stopped.

Massacre at CIAD #8 in Juárez

The massacre took place at 7:15 Wednesday night, August 13, 2008 at the CIAD (Center for Drug and Alcohol Integration) Rehabilitation Center #8 in the Colonia First of September. It was the single most deadly violent incident in Juárez in recent times.… more>

Why would the Army go into a small drug rehab center in a poor barrio and kill everybody inside? Maybe somebody was hiding inside, somebody who needed to be killed. But still, why the Army? Why kill everybody?

And yet if you go to Juárez today and stand on one of the downtown boulevards you’d never know there was anything wrong. People go about their day, they get to work, the buses run, businesses are not shutting down. Things seem more vibrant and alive than across the river in El Paso. But then suddenly there will be a convoy of armored vehicles and humvees with mounted high caliber machine guns, and soldiers in battle gear. It looks like Baghdad. They pass by, and things go back to normal.

The weird thing is the city functions while being terrorized. Nobody does anything to stop it because there is nothing to be done. So life goes on in spite of it. 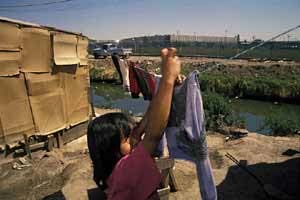 Girl hangs clothes to dry in a squatter’s settlement bordering a sewage ditch
near a maquiladora industrial park on the Rio Grande.
(Photo © Julián Cardona)

Police in Juarez found a decapitated body hanging from an overpass Thursday and the head in a different location.

The body was hanging over the Backwards Bridge.

The head belonging to that body was later found inside a plastic bag at what is known as the Plaza of the Journalists.

Authorities are unsure whether this was a threat intended for the mass media.

Everybody we talk to has accepted that the drug cartels are stronger now than the government. We supply arms to both sides, we buy the drugs that feed the coffers of both sides that pay for the weapons. There are no two sides, it’s just a country in flames and we fan the fire, a kind of consumption of a country. 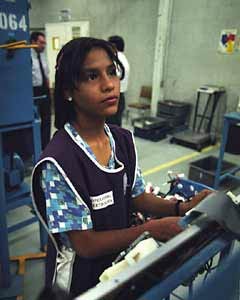 These killings are all messages.

EL PASO – Juárez students came across a macabre sight early Tuesday when they came across the body of a man tied to window bars and wearing a pig’s mask.

Police said the body – one of three reported the same day – was suspended from the bars, with his feet touching the sidewalk, at the corner of Faraday and Gomez Morin, where students walked by on their way to the Colegio Bachilleres No. 6 school.

A sign stating “this is going to happen to all Aztecas” was affixed to the building’s roof above the body, authorities said. The Aztecas is among the top three most notorious gangs in Juárez.

Police said they were investigating two other grisly murders on Tuesday, including the death of a woman who was shot in the head, and the slaying of man who was beheaded.

The woman’s body was discovered in a vacant parcel in the Salvarcar subdivision, and the decapitated man was found in southeastern Juárez off Avenida Mateos Torres Extension. The man’s body had a signed attached that stated “the Family must be respected,” alluding to a drug organization by that name.

Police had not identified the victims.

But what is the message?

Nobody is in control.  No one can stop this.  No one can fathom it.  The level of brutality, or some people call it evil, sort of takes your breath away.  It’s been getting worse, and worse, over the course of the year, and nobody knows how it can be stopped.

And then there is the issue of our responsibility, as it was largely our desires for cheap labor, cocaine, heroin and meth that put Juárez into this hell hole.

This is the message.  But how to tell it to the people out there in public radio land? 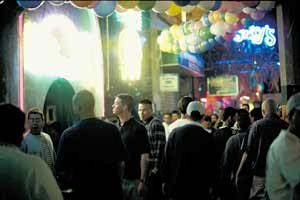 scott
forty four people were murdered in juarez in january–three of them police commandantes. i spent all of saturday in juarez and i’m going back tuesday or wednesday. the stuff i wrote about in down by the river is rebecca of sunnybrook farm compared to now. that city of fear piece has moved north and is in juarez. no one is in control, everyone dies. and i gotta tell you there ain’t no gringos over there now.
chuck

“chuck” is author Charles Bowden: GQ “Mexico’s Red Days,” Juárez, the Laboratory of the Future, Down By the River. The reference to “City of Fear” is a story in Vanity Fair about São Paulo being run by drug lords who are in prison:

For seven days last May the city of São Paulo, Brazil, teetered on the edge of a feral zone where governments barely reach and countries lose their meaning. That zone is a wilderness inhabited already by large populations worldwide, but officially denied and rarely described. It is not a throwback to the Dark Ages, but an evolution toward something new—a companion to globalization, and an element in a fundamental reordering that may gradually render national boundaries obsolete. It is most obvious in the narco-lands of Colombia and Mexico, in the fractured swaths of Africa, in parts of Pakistan and Afghanistan, in much of Iraq. But it also exists beneath the surface in places where governments are believed to govern and countries still seem to be strong… more>

Juárez is old news in a way because what’s happening now is the violence is spreading across mexico. We don’t hear about it because real reporters can’t go to the places where it’s happening. Or when they go there nobody can talk, nothing happened. I’m serious. If nobody will talk then nothing happened as far as the NY Times or NPR is concerned. And yet all this shit is happening. This is a long article but it gets better as you go and is a good summary of what’s happening now in Mexico:

Drug War Mayhem Boils Over From Border to Border

Tourists touching down at Mexico City International Airport are hereby forewarned not to trip over the human heads that may be rolling around at your feet when you disembark. Four have been found in recent weeks in and around the terminal complex although their corresponding bodies have not yet been located… more>

If we talk about Juárez it’s like talking about the place where the infection or cancer started, but it has now spred and the entire country is dying. We could go on denying that this is true and pretend it will not infect us here in the United States. But I think the disease is already here, that maybe we are the true source, and that the only hope is to legalize drugs and then start something like a Marshall Plan for Mexico. This is probably impossible for many reasons, but it’s what needs to be said. 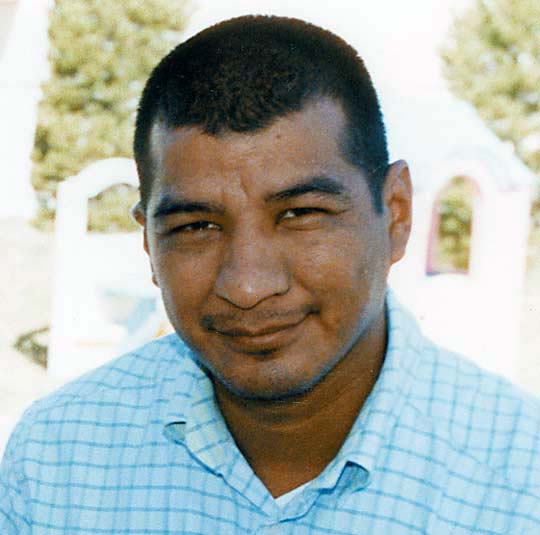 When is the HV special going to air? This is one of the most important stories of the decade, so I’m really glad you are devoting so much time to it.