HV photo-audio-essays on our southern neighbors 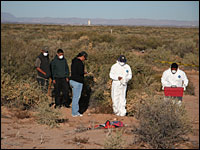 Dead man in canal was a street corner clown

according to the state authority.

Nevertheless, this person has not been identified,

but it was reported

The victim’s face was painted as a clown,

green with a red nose,

He wore a red polo shirt,

and a dark beret.

The body was found in the Diaz Ordaz viaduct,

at Norzagaray Blvd in the colonia Bellavista, on November 11 at 9:40 pm.

The body was found on its side,

with bullet wounds in the right side,

At this time, the motive for the murder is unknown as well as the

identities of the murderers.