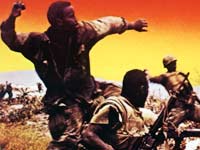 Recordings, remembrances, poetry, and PTSD from some of those who fought America’s longest war:

The sounds of Saigon, 1972: in combat, on the radio, in the streets, were recorded by Claude Johner for the Folkways recording Good Morning, Vietnam (liner notes 4M pdf).

Doug Peacock, former Green Beret medic, deals with the PTSD of vets, including himself (interviewed by Scott Carrier). Peacock wrote the book Walking It Off: A Veteran’s Chronicle of War And Wilderness.

Rich Kepler’s war experiences were bottled up and about to burst, until he released them in his poetry (producer: Larry Massett).

An oral history of African-American Vietnam vets, based on the book Bloods: Black Veterans of the Vietnam War: An Oral History by Wallace Terry; produced for radio by Katie Davis.

I almost went to Vietnam in 1967
but was living abroad at the time.

I was in Vietnam earlier this year
for business, and saw a people
and society that is both vibrant
and humane, and where most
Westerners living there find a
wonderful place to be. Where
did we go wrong to go to war
with these people?

I was interested in the music at the shows end can you help me find the music ?

I really liked Rich Kepler’s poetry- is he published? I haven’t been able to find anything on-line.

Coltrane’s rendition of “In a Sentimental Mood” at the end of Terry’s piece is what finally made me cry. I don’t think I’ll ever be able to listen to “In a Sentimental Mood” without remembering the pain of all of those Vietnam Vets…and now, all those returning young men experiencing the same pain as a result of another needless war.

This program is the best that radio can be. Brutally moving, the calm way in which these men described their horrific memories is completely humbling to me. I can not even imagine the awful burden they carry.

Moving and necessary…it should be played in classrooms around America!

As a Vietnam Vet with PTSD, the program really touches on the heart and results of war. Too bad our political leaders don’t have a clue!!

An extraordinary show. Should be mandatory listening for everyone in Congress and the White House.

A program that will probably never air is one that offers the same deeply human insight from the Vietnamese, Lao and Cambodians who were on the other side of US gun sights and bombing runs.

Wonderful program–wonderful. I was fortunate to have not been able to sleep this morning, got up, turned on the radio to my default station, and there it was in all its glory. Thank you.

Mental telepathy is “hearing voices” This is created not by stress or medications but by a ritual.

I served in Viet Nam with E Company 1st Recon BN 1st Marine Division. An extraordinary program. People never released what the vets went threw. For the first time in American history American soldiers were made to bear the burden for an unpopular war. There were no parades welcoming us home. For many of us there were periods of stark terror, fighting an enemy that didn’t value life what were we to do!