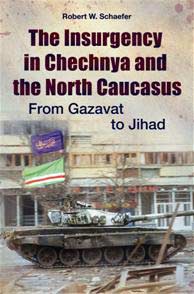 A new book is out by Lt. Col. Robert Scheafer, U.S. Army Special Forces, Eurasian Foreign Area Officer, and poet in the NEA book Operation Homecoming. He’s also host of the HV hour For the Fallen and the NPR stories “Clusters” and “Remembering a Fallen Friend.”

In his book The Insurgency in Chechnya and the North Caucasus: From Gazavat to Jihad:

An expert on both Russia and insurgency offers the definitive guide on activities in Southern Russia, explaining how the Russian approach to counterinsurgency is failing and why the conflict will continue to escalate.

The unique geopolitical characteristics of the North Caucasus has made it a site of conflict for thousands of years. It was, in many ways, the testing and training grounds for today’s conflicts in Iraq and Afghanistan. Understanding this volatile region is especially important now in light of President Obama’s effort to “reset” the relationship between Russia and the United States.

The Insurgency in Chechnya and the North Caucasus: From Gazavat to Jihad is an exhaustive treatment of the 400-year period leading up to the present. Thematically organized, it cuts through the rhetoric to provide a contextual framework through which readers can understand the conflict in the region.
—ABC-CLIO (publisher)

The book is part of the Praeger Security International series. Some early praise for Schaefer’s work:

“A must-read for anyone who wants to understand the nuances of the conflict in Caucasus.”
– Brian Glyn Williams, Associate Professor, University of Massachusetts-Dartmouth