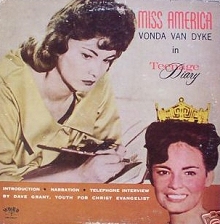 An audio drama about guy-love and God-love, starring the 1965 Miss America, Vonda Kay Van Dyke. She also played lead in the 1960 film “Teenage Diary.” 1960 film. An mp3 of the entire LP is part of the 365 Days Project, housed at WFMU.

Whoa, the diaries! I couldn’t tear myself away.