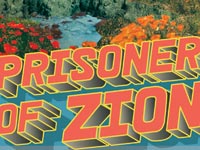 Shortly after the World Trade Center fell in autumn 2001, it became clear the United States would invade Afghanistan. Producer Scott Carrier decided he ought to go there too. Why? To see for himself: that’s what writers do. Who are these fanatics, these fundamentalists, the Taliban and the like? And what do they want?

For the weekend of 9/11/11, Hearing Voices from NPR presents Prisoner of Zion. Carrier narrates his trip to Afghanistan. With his young guide and translator, Najibulla, they tour the horrors of war.

Years later Naji tells Scott he must leave his homeland — the dangers for a translator have become extreme. Scott gets Najibulla accepted at Utah Valley University. Naji, it turns out, handles the Mormons quite well, while Scott, teaching at the same school, has a hard time with them. At the end Naji is graduating, about to get married, and start a new job; while Scott wonders whether he can stand teaching another year — or if he’ll wind up on the street like Naji.

→ From Afghanistan: A photo-audio-essay by Scott Carrier; with sounds, images, songs and prayers of the Afghan people.

→ At Amazon: Prisoner of Zion: Muslims, Mormons and Other Misadventures

Absolutely loved this story tonight! The writer sounds so despondent, but I am here to tell you, Scott, that you are an absolute success! I loved hearing what life is really like in Afghanistan and it is so commendable that you helped bring this boy to America.

We count on Scott to tell the truth, “or try.”
We are able to sink our moribund souls into the mud with the dead, or rise with the soaring, hopeful light of his friends. Always true.
We know Scott will take us somewhere we may never visit, and recognize it immediately.

It’s funny and heartbreaking and like all Scott’s stories…it adds up to more than the sum of its parts. It’s also such a rare pleasure these days…to listen to a radio story roll out over a whole hour…with music and mix choices that can actually still surprise listeners. I don’t like to use the word ‘art’ very often, but thanks for making some here.

[…] Hearing Voices show on Prisoner of Zion, a one-hour program featuring readings from the book: http://www.hearingvoices.com/news/2011/09/hv122-prisoner-of-zion/ […]

Pingback added by Places to hear interviews about and readings from “Prisoner of Zion” < prisoner of zion on 09.14.11

Wow, this is one of the most captivating stories I’ve heard to date. I purposely skipped the podcast because of the mention of 9/11 & could not bear the thought of hearing another tragic story. However, my husband insisted that I listen to it & I’m so thrilled I gave it a chance-it was not what I expected- absolutely brilliant. I can’t wait to read the entire book and other stories written by Scott.

I am so happy to hear some new material by Scott Carrier.
Does anyone know if there are any plans for a print version of “Prisoner of Zion”? I don’t have an e-reader.

[…] Later in the story I make Najib read Huckleberry Finn and Catcher in the Rye, and then write papers on them. I helped him with the papers. I just kept asking him, ‘and then what happened,’ then I made him write down what he said. Even though he’d grown up in a tribal society, first under Soviet occupation then through a civil war where 13,000 people were killed, he completely identified with both Huck and Holden. He thought America in the 1800s is exactly like Afghanistan today, and that his trip to America was like Huck going down the river. And he shared (a Pastun-variety) existential angst with Holden. Plus, he was able to write about these things in a captivating style, thus proving that universities do work, where war does not. You can listen to more of this story on Hearing Voices. […]

Scott has taken his book off the market for a while.

Hoping plans for “Prisoner of Zion” are not stalled but rather forthcoming. Very much looking forward to reading – I love listening to the full range of stories, from past radio to the present, on “Hearing Voices” and especially appreciate when Scott Carrier is featured.

I am so disappointed that this book is no longer available, but I trust Mr. Carrier’s judgement and reasoning for pulling it at this time. PLEASE make an announcement when the book becomes available again.