Brian’s blog is Don’t Hold Your Breath and Beth is a Cystic Gal. More Catie Talarski pieces are at PRX. Music in the story:
Matt Costa “Bleeding Hearts” Mobile Chateau

“Four Failings Lungs” was edited by John Dankosky of WNPR, Connecticut Public Radio, where a version of this piece premiered on their series Where We Live. From
another episode, here’s Beth’s poem: 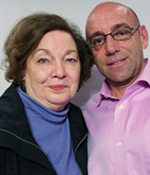 As a child, Howell Graham was diagnosed with cystic fibrosis. In 1990, he had a double-lung transplant — a risky, experimental operation at the time. Today, Howell is one of the longest-surviving recipients of that surgery. Howell and his mom, Nan, remember the days after his surgery. Music: Pram “Mother of Pearl” Museum of Imaginary Animals

The Cystic Fibrosis Foundation has chapters in your state.

I listen to NPR while I am in bed. I heard Laura Rothenberg’s journey as a cystic fibrosis sufferer and want to thank you for airing her beautiful, heroic journal. She was an angel and so were her parents, I can see that.

Pingback added by Hearing Voices is Meditation « coffeeflavouredtea on 10.16.11

[…] been done. This past weekend I visited Brian’s mom, and we were talking about the episode of “Hearing Voices” that paired my documentary with “My So-Called Lungs.” She told me the show had special […]