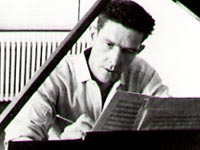 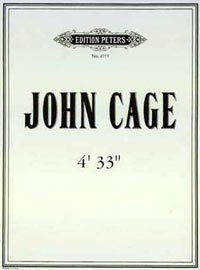 From A Chance Operation: The John Cage Tribute.

Words/voice by Cage, music/sounds by Tudor, from their album Indeterminacy

From the album Variations IV, Volume II, performed by randomly tuning radios on stage, and live mixing in sounds inside and outside the performance space.

From the late poet’s Prison

Another 1948 Cage composition; performed on piano by Drury on his album In a Landscape

An interview with John Cage from the from a >documentary film,directed by Miroslav Sebestik:

When I hear traffic, the sound of traffic — here on sixth avenue, for instance, I have the feeling that a sound is acting. I love the activity of sound. What it does, is it gets louder and quieter, and it gets higher and lower. And it gets longer and shorter. I’m completely satisfied with that.

The sound experience which I prefer to all others, is the experience of silence. And this silence, almost anywhere in the world today, is traffic. If you listen to Beethoven, it’’s always the same, but if you listen to traffic, it’s always different.

Off A Chance Operation: The John Cage Tribute.

One more from A Chance Operation: The John Cage Tribute.

From one of only ten albums released by Brian Eno’s Obscure Records label. The group Voices and Instruments includes Fred Frith, Robert Wyatt, and Carla Bley. Free download at WFMU’s Beware of the Blog.

I wrote this for the celebration!

Pingback added by Passing Time / Commemorating Time (ON AN ON Takeover) | BANGORAMA on 09.03.13