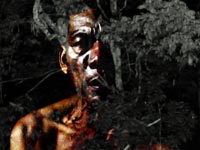 Great radio essay about master shaman Ayahuasquero. The music that shaman make is to call spirits that will heal their patient. It’s amazing how shaman use this skill to heal or attack.