Light ’em up, folks, it’s a g-ddam “Miracle”, more Hanukkah harmonies from the Maccabeats and for their Miracle Match Bone Marrow Foundation fundraiser:

Need more Maccabeats? So did Adolf:

END_OF_DOCUMENT_TOKEN_TO_BE_REPLACED

Especially loved the Yizkor prayer. Gotta love a G-d who, after a hard day of spilling blood and crushing heads “over a vast area,” carves out some personal me-time to sip from the stream…

Let there be known among the nations, before our eyes, the retribution of the spilled blood of Your servants. And it is said: For the Avenger of bloodshed is mindful of them; He does not forget the cry of the downtrodden. Further it is said: He will render judgment upon the nations, and they will be filled with corpses; He will crush heads over a vast area. He will drink from the stream on the way; therefore Israel will hold its head high.

The New Year starts tonight at sunset — Jewish days begin at sundown. Welcome to 5770, the first day of Tishri: Rosh Hashanah. So knock off work, sound the shofar, shuffle off to shul, and wish all: L’shanah tovah (“for a good year”; candle lighting times for your area).

Rosh Hashanah is “the day of judgment” (Yom ha-Din) and “the day of remembrance” (Yom ha-Zikkaron). And, ‘course, according to Kabbalah, the year 5770 will affect the rectification of the Sefirot of Keter of Hod of Hod of Yesod — but you know that, right?

So get ready, folks, cuz in 10 days we got us a Yom Kippur coming, the Day of Atonement, and the big guy’s gonna do some writin’ in the book, signed, “sealed”, delivered.

y’hi ratzon mil’fanekha Adonai eloheinu vei’lohei avoteinu
May it be Your will, Lord our God and God of our ancestors

sh’t’chadeish aleinu shanah tovah um’tukah.
that you renew for us a good and sweet year.

And some equal-time for our fellow Semitic friends: 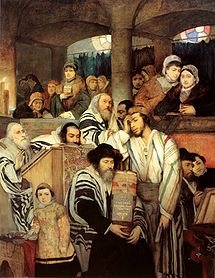 Sundown last night started the year 5769, Rosh Hashanah, the Jewish New Year; the first day of Tishrei, the seventh month of the Hebrew calendar. Rest, repent, blow the shofar, and get ready for Yom Kippur.