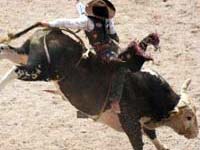 Cowboy is a great documentary for radio. However, since much of the story took place in Cheyenne, WY, I was waiting to hear the Wyoming classic song, Ragtime Cowboy Joe. Otherwise, an excellent presentation.

The story told in “Cowboy” is still as historically timely as when it was first aired, as I learned today, back in 1980. The segments on the cattle drives (many through my home town of Fort Worth, TX), the rodeo clowns — the “safety valve” of just about any rodeo — and the matter-of-fact sincerity of rodeo performers were particularly outstanding. Thanks for bringing it out of the archives and on-air again.
Joel Fowler
Fort Worth, TX

Hands down, one of the best radio docs I have ever heard on NPR — tuned in by accident the other day, was enthralled, had to listen to the entire show. The writing is superb, the production values likewise. Wow. If anyone involved in the production of this show is reading this, hats off to you!