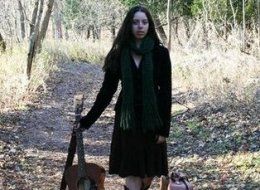 “Two coyotes attacked a promising young musician as she was hiking alone in a national park in eastern Canada, and authorities said she died Wednesday of her injuries. The victim was identified as Taylor Mitchell, 19, a singer-songwriter from Toronto who was touring her new album on the East Coast.

She was hiking solo on a trail in Cape Breton Highlands National Park in Nova Scotia on Tuesday when the attack occurred. She was airlifted to a Halifax hospital in critical condition and died Wednesday morning, authorities said.…

Wildlife biologist Bob Bancroft said coyote attacks are extremely rare because the animals are usually shy. Bancroft, a retired biologist with Nova Scotia’s Department of Natural Resources, said it’s possible the coyotes thought Mitchell was a deer or other prey.

“It’s very unusual and is not likely to be repeated,” Bancroft said. “We shouldn’t assume that coyotes are suddenly going to become the big bad wolf.”

Been reading Dobies 1949 book on Coyotes. Absolutely no records of coyotes attacking people. Could this attack been by wild dogs or wolves ?

John: like you, I was skeptical of coyotes as killers. But the eye-witnesses in the article, linked to above, ID-ed the coyotes. And police who arrived quickly shot a coyote near the scene. Not conclusive, but certainly circumstantial.