Mone started posting her novel straight from her phone to a media-sharing site called Maho i-Land (Magic Island), never looking over what she wrote or contemplating plot. “I had no idea how to do that, and I did not have the energy to think about it,” she says. She gave her tale a title, “Eternal Dream,” and invented, as a proxy for her adolescent self, a narrator named Saki, who is in her second year of high school and lives in a hazily described provincial town. “Where me and my friends live, in the country, there aren’t any universities,” Mone wrote. “If you ride half an hour or so on the train, there’s a small junior college, that’s all.” Saki has a little brother, Yudai, and a close-knit family, a portrait that Mone painted in short, broad strokes: “Daddy / Mom / Yudai / I love you all so much.” Before long, however, Saki, walking home from school, is abducted by three strange men in a white car: “—Clatter, clatter — / The sound of a door opening. / At that moment . . . / —Thud— / A really dull blunt sound. / The pain that shoots through my head.” The men rape her and leave her by the side of the road, where an older boy from school, Hijiri, discovers her. He offers her his jersey, and love is born.

On Mone’s third day of writing, readers started to respond. “Please post the next one,” and “I’m interested to see what happens,” she remembers them writing. She had been posting about twenty screens a day—roughly ten thousand words—divulging as freely as in her diaries, only this was far more satisfying. “Everyone is suffering over their loves and trying to figure out their lives, but my particular struggle was something I wanted to let other girls know about,” she says. “Like, ‘Hey, girls, I’ve been through this, you can make it, get up!’ ”
—“Letter from Japan: I ♥ Novels” : The New Yorker

Salon has excerpts of a few English examples. And The Independent has an article by Barry Yourgrau, “the first and only American author who’s written for Japanese cellphones:”

As seen on screen ‘Carp’, a story by Barry Yourgrau (from his I-Mode Stories)

To hide from life, you sneak out to a pond in the park, and lower yourself into its depths. You will live among the carp, you’ve decided. You will be a carp person!

Underwater, things are comforting and dim. Carp come flitting around. They don’t look happy. “They regard me as an intruder,” you think. “Well, tough. They should blame the world above for being so miserable.”

You look for somewhere to settle for the night. You feel lightheaded from holding your breath, but it’s not as hard as you thought. Peering around, you get such a shock you almost gasp and swallow water. A girl is staring at you! She has trendy orange hair and wears big thick white socks. You gape at her. She makes hand signs that demand, obviously: “What are you doing here?” Taken aback, you sign the same question in reply. The girl tosses her head, annoyed.

She points behind her with a thumb. There in the dimness, a whole crowd of persons are now visible, spread out on the pond bottom for the night. You blink at them. “Carp people,” you think. But they aren’t welcoming. No: they scowl. They all start gesturing for you to “shush” – to go away! The girl glares, hands on hips.
—“Thumb novels: Mobile phone fiction” – The Independent

Right now most cellphone novels are in Japanese. Textnovelis a place to read and publish in English. And the king of keitai shōsetsu is the all-.jp Maho i-Land (Magic Island) [魔法の図書館［魔法のiらんど: 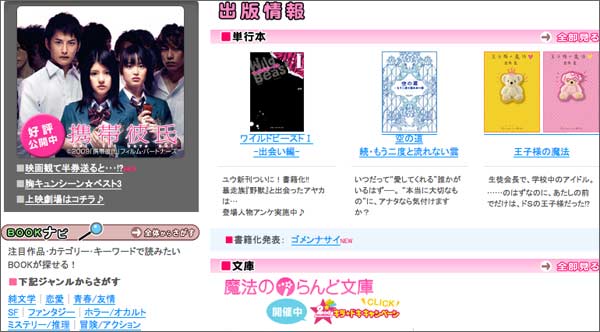