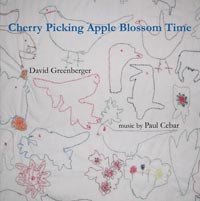 In an America that seems increasingly dominated by amnesia, and the erosion of its history, it’s very heartening — and poignant — to hear these fragments of lives as they draw to a close. The rootsy tone of the music — Ry Cooder, Tom Waits, David Byrne and even Beefheart’s Magic Band come to the mind’s ear — adds Americana to these tales of vanishing Midwestern life. Here are the man who cheated at tomato- growing by hanging a purchased one on a vine; the man who made peace with his artificial arm and hung shopping bags from it; and the man in a red shirt who feels like a king. There are exuberant moments, but the most moving pieces are the elegies: people who gently mourn their vanished partners — one speaks of his wife as his co-pilot, another of how he’s tried to replace his wife with crossword puzzles. The matter-of-fact tone that David uses in these vignettes is partly what makes them so emotional. In ‘No Rooms Here’ you can hear the life and memory of the elderly female narrator dissolving as she speaks. Just as certain as our death is the uncertainty of what follows — this ambiguity riddles the inhabitants of Cherry Picking Apple Blossom Time.

The fragments drift by in a meditational parade — the slow shuffle of people preparing to exit their lives, setting things down, and then picking them up a few minutes later, trying to weigh everything up while it’s still theirs. Here, in this album, they can dwell a little longer, and we can hear them until our echoes fade with theirs. I recommend this record to anybody who cares about people.

A King in Milwaukee