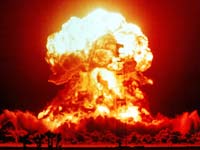 From the British prime minister’s speech to the House of Commons, June 4 1940, preceding the Battle of Britain:

From the benefit CD Path To Zero – A Prayer Cycle

A phone conversation between President Lyndon Baines Johnson and Secretary of Defense Robert MacNamara. Presented in the American RadioWorks program “The President Calling.” ARW offers free mp3s at iTunes U of the White House Tapes: LBJ.

A quick a-capella from the CD Honor

– A Benefit for the Honor the Earth Campaign.

“Their Own Destruction” (2:11) Vidar Brennodden

A Prez GWB mix-up by an Oslo, Norway musician (more info below).

The Battle of Qala-i-Jangi (11/25-12/1/2001), in Northern Afghanistan, began with an uprising of foreign Taliban captives at the Qala-i-Jangi fortress. It took a week for Northern Alliance fighters, with British and American Special Forces, to stop the revolt. Of the original 400-500 prisoners, only 86 prisoners survived — including two U.S. citizens, the “American Taliban” John Walker Lindh (now imprisoned), and Yaser Esam Hamdi.

A few days later, producer Scott Carrier documented the events, talking with reporters in Afghanistan, and one of the surviving i, Ali Abdul Matar, an Iraqi. Postscript: In Hamdi v. Rumsfeld, 2004, the U.S. Supreme Court told the U.S. Justice Department they cannot hold Hamdi indefinitely without a trial. He was released to Saudi Arabia, on the condition he give up his U.S. citizenship. 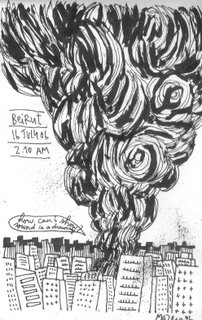 A duet, of sorts, from July 2006: Lebanese artist and trumpeter, Mazen Kerbaj, recorded himself sitting on his Beirut balcony,while live improvising with the Israeli Air Force, who provided percussion as they bombed his city. Sound found at WFMU “Trumpet vs. Bomb,” who posted a longer version (6:32 mp3):