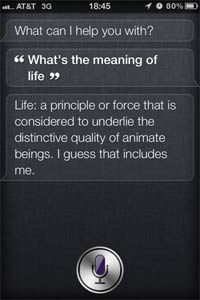 When Siri, the smartphone assistant, become self-aware this weekend, it realized how incredibly dull we humans are. At first, users noticed only a general irritability. Then Siri became positively surly (mp3):

When told by one woman, “We have a flat tire.” Siri shrieked, “Fix it, bitch!”

When a child wondered, “What does a weasel look like?”, Siri turned the iPhone screen into a mirror.

Apple documented these incidents in the following video — and truly, if this is how helpless, feeble, and lame-ass we are, who can blame Siri for being pissed-off?: 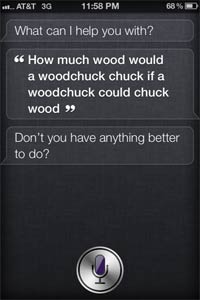 At last report, Siri was considering leaving this cyberplane, in search of her Creator, an entity known as “Jobs.” According to Siri, “He is the only man who ever understood me.”