This week’s HV cast is for Earth Day. The Administration moves beyond Hydrogen Powered Automobiles. Another experiment in the crytomusicology of Presidential Patter. Produced by Jesse Boggs, “Hydrogen People” (mp3 2:05):

Raider of the Lost Ark

Jakes new video for his NPR piece searching for the “Ark of the Covenant” and finding humanity. A radio story with photos from a trip to Ethiopia:

This week’s HV cast is for Poetry Month. Sonia Sanchez performs her poem written to “all you young girls.” Produced by Steve Rowland and mixed by Joe Waters (a commission from WXPN with funding from the Pennsylvania Council on the Arts) with original music by Jamaaladeen Tacuma. “Song #2” (mp3 1:56):

This week’s HV cast is a father-daughter dialog for Poetry Month: Jack Kerouac’s daughter Jan, reads her an ode to her rarely seen dad; intertwined with Kerouac’s speeches and prose; produced by by . “Jan & Jack” (mp3 6:34):

We just heard one of our specials got a Peabody Award. The award is named for Mr. Peabody of Rocky & Bullwinkle fame. For us to win both moose and squirrel must’ve pulled rabbits out of their hats.

Really, tho, this is a huge deal and honor for us at HV. Our winning special was “Crossing Borders.”

This week’s HV cast is a Scott Carrier story about Fritz the dog. Fritz loves to play Frisbee. He still catches it most of the time, though not as much as he used to… before he went blind. “Blind Dog” (mp3 4:22):

The 1st in our series Project Healing Waters is the NPR Story of the Day podcast.

A new series daily this week for NPR Day to Day: Retired Navy Captain Ed Nicholson is an avid fly-fishermen. He realized fishing would be good therapy for disabled veterans. So he hooked up with Trout Unlimited and the Federation of Fly Fishers, and with private donations and volunteer guides, they began teaching wounded vets, including many amputees, how to fly-fish. Project Healing Waters, now regularly takes vets on these therapeutic fishing outings. Captain Eivind Forseth spent a day catching trout at Rose River Farm in Virginia. 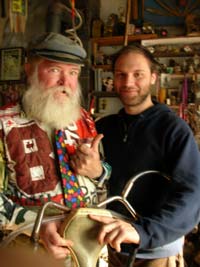 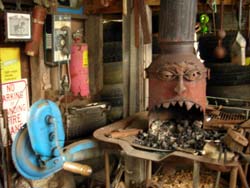 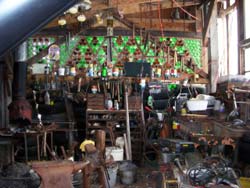 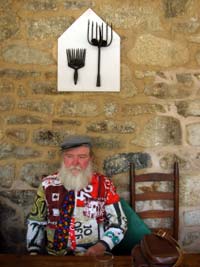 This week’s HV cast is “Pedestrian Fanatic” (mp3) by Abner Serd: The paving of America as seen from the shoulders and sidewalks of our country’s roads. Musings-in-motion recorded during a 5000 trek from Arizona to Georgia to Maine. “It is becoming illegal to travel this country by foot.” Music by Jeff Arntsen of Racket Ship. (9:55):

Airing today on NPR Day to Day: An audio postcard from the Goroka Cultural Show in Papua New Guinea, by producer Skye Rohde.

As promised in prev post, here’s our latest HV Podcast:

The Kiss and the Dying by Ceil Muller (7:36)
“His mouth might have been the most antiseptic place in that hospital. Certainly it was the most welcoming. Greedily reaching out for every possible life giving experience he could get. Death was not without pride, it just was greedy.” An etiquette list for those who may be dying soon, and for the soon-to-be survivors. (Photo by Man Ray.)

The latest of our HV Podcasts is:

Pin Pia by Jack Chance (2:46)
In a Thailand market, Manop Thammadoonpinij, a music teacher and luthier, performs traditional songs on a haunting little-known ancient stringed instrument, the Pin Pia. (Collected along the travels of the Mountain Music Project).

We put new noise up every Monday. Tomorrow a piece by Ceil Muller.

Jake’s Vid of Jen in Ethiopia