“I particularly loved listening to baseball because the announcer wouldn’t just say, ‘He hit the ball to third base.’ He’d talk about the history of baseball, the weather, the lives of the different players – it was like being with somebody I liked. So I started thinking about being on the radio myself.”

“I’d take actors into a studio, tell them what a scene required and have them improvise, then I’d edit the best of what we’d produced into a show that also incorporated music and monologues of me speaking. It was unreal, yet real, and people didn’t know what to make of it.”

I caught his last stage performance, “The Blue Room.” Was everything you’d expect from a Frank-en-story: LOL funny, absurd, disturbing. What more could you want from a night out? 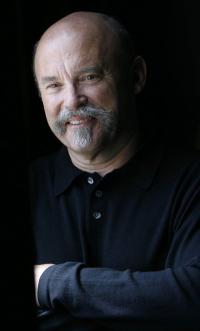 The Salt Lake Tribune profiles Jeff Metcalf “Writing for the stage” about his prostate cancer diagnosis:

He didn’t talk about it. Not to his grown daughter, who was heading off for an Italian adventure. Not to his best tennis buddies. Not to his wife of 20-some years, Alana, a decision he now describes as “the greatest moment of stupidity in my married life.”

His play is “A Slight Discomfort.” Jeff calls it “sort of a comedy about cancer.” The theatre performance opens in early October. Our radio version is online now.