Grief and guts fill the work day of Aftermath,® Inc: Specialists in Crime Scene and Tragedy Cleanup, Trauma Cleanup, Accidental Death Cleanup. Interview with Tim Reifsteck by Laura Kwerel, produced by Nick van der Kolk; an excerpt from “Aftermath,” a Love and Radio podcast. (L & R’s slogan: “What Ira Glass might make if he showed up to work drunk.”)

Ken Nordine wants to be “The Bullfighter” (2001 A Transparent Mask). 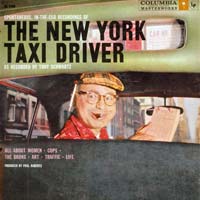 Tony Schwartz talks with The New York Taxi Driver about “Females” as fares.

John, the Medicine Man does the “Chicago Hustles.” An excerpt from the documentary on the city’s underground economy by our hosts Ann Heppermann and Kara Oehler for the 2005 series Chicago Matters: Money Talks.

The New York Taxi Driver waxes work philosophies with Tony Schwartz in “…The Way It Has to Be.”

And mixed in there is “Toner” by Cornelius (2006 Sensuous). A “collaboration with Takagi Masakatsu produced for Japan’s Sound & Recording magazine… inspired by inkjet printers!”

[…] the first time in years. And for the first time ever, we host TOGETHER! Listen here or visit the Hearing Voices website. Our boss, taskmaster Barrett Golding, first posted the blog entry that follows on that […]