I Seem to Be a Verb 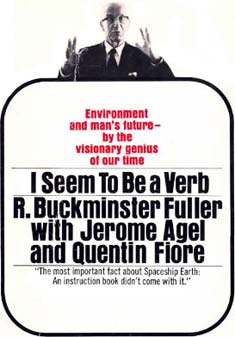 We at HV are now twits, but with a twist. Most tweets are rapid and vapid. We’re experimenting with another approach: slow and substantive: twitticisms. Every morn we add enter another line from R. Buckminster Fuller’s I Seem to Be a Verb

Running along the footer of that book’s pages is a continuing line of text. The book’s out-of-print so we’re resurrecting these Bucky bits in 140-character chucks. Follow us @hearvox or read the whole below.

I live on Earth at present, and I don’t know what I am. I know that I am not a category. I am not a thing — a noun. I seem to be a verb, an evolutionary process — an integral function of the universe.
–R. Buckminster Fuller, I Seem to Be a Verb (1970)

This text is the footer of Bucky Fuller’s I Seem to Be a Verb:

Society neither hears nor sees the great changes going on.

Either man is obsolete or war is. War is the ultimate tool of politics. Political leaders look out only for their own side.

Politicians are always realistically maneuvering for the next election. They are obsolete as fundamental problem-solvers.

They think and demand justice for all humanity with no exceptions.

Theirs will be the most powerful constructive revolution in history. Earth is a very small spaceship. We are all astronauts.

Each human is a whole universe. We have 28,000 pounds of explosives for each human being on earth.

Weaponry has always been accorded priority over livingry. Only two alternatives — Utopia or Oblivion.

All the fundamental problems are world problems. Man knows so much does so little.

Greatest fact of century: We can make life on earth general success for all people.

World’s prime vital problem: How to triple swiftly safely satisfyingly overall performance realizations per pounds kilowatts manhours of world’s comprehensive resources, rendering those resources capable of supporting one hundred per cent of humanity’s increasing population at ever higher standards of living than any human minority single individual has known or dreamed of.

War over population hunger disease would cease to exist if “haves” devoted larger share of their industrial budget to world livingry.

Malthus is wrong. There is enough to go around.

Every time we use real wealth it increases. Intellect must increase wealth to eliminate poverty.

Greatest single revolution in human affairs has been ascendancy of intellect’s intuitive mastery over the physical but all the important critical events realizing that revolution just happens.

Only the impossible happens. Probability unreliable. To each of us environment is everything that isn’t “me.”

It could and probably will be provided by the utterly impersonal problem solutions of man’s antibody, the computer.

Only to their computer’s superhuman range of calculative capabilities can and may all political scientific religious leaders face-savingly acquiesce.

Evolution is apparently intent that man fulfill a much greater destiny than that of being simple muscle and reflex machine, a slave automaton.

(By 1975 China may be most impressively modern nation, highly automated.)

Automation can produce wealth beyond all our needs and dreams.

(We’ve always had automation. What’s happening to your lunch?)

Automation has made man obsolete as physical production and control specialist — just in time.

Specialization is only a fancy form of slavery wherein the “expert” is fooled into accepting his slavery by making him feel that in return he is in a socially culturally preferred, ergo, highly-secure, life-long position.

Nature always does things in simplest most efficient way. All nature is based on triangles.

We are living in a world where change is normal.

Artists are now being recognized as extraordinarily important to human society.

Scientist are utterly irresponsible regarding pro-vs.-anti social disposition of “eggs” they lay in the laboratories.

Every child is born a genius: Ninety-nine percent are degeniused by early post-natal circumstances.

Human being has great potentiality, but many wires get disconnected.

Ages 0 to 4 are biggest “school” opportunity. Child is trim tab of the future.

Real schoolhouse is in the home and outdoors.

Within 10 years anything reasonably think-upable by science fiction will probably have been realized.

Possession is becoming progressively burdensome, wasteful, and therefore obsolete, total man may be going through a total wave of transformation into an entirely new relationship with the universe.

Humans can now whisper in one another’s ear from anywhere around the world. (Be sure to entertain all your emotions.)

Man, as designed, is obviously intended to be a success. Success: not a bad thing to have “hanging over your head.”

Experiment is always valuable. You can’t learn less. You can always get nearer to the truth.

(Language can be a block to reality.) Coping with the totality of Spaceship Earth and Universe is ahead for all of us.

(Man was designed with legs — not roots.) Man can do anything he wants.

Brilliant! Thank you for this.

how did i miss this? brilliant. i’m going to find that book somehow.

Thank you so much for this. Why is this complete extract so hard to get hold of?!

A DuckDuckGo search for a Bucky quote i was half remembering brought me here. (My old books, amongst which are a bunch of Fuller’s including I Seem To Be a Verb, are currently inaccessible).

Thanks for providing another point of access to Fuller on the Interwebs! Can’t have too many. More people need to know about his work and thinking.