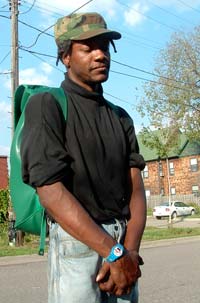 This mix of this original Andrew Turpening song features interviews with Rene and Tommy. Tommy was recorded at the intersection of Cedar Ave. and Highway 94, between the cities of Minneapolis and St. Paul; Rene was in a family shelter in Minneapolis.

Edwin Lanier has been sober for many years. But, as Lanier told his friend David Wright recently, he nearly drank himself to death — that’s the prognosis a doctor gave him after his 28th treatment for alcoholism. Lanier and Wright met on an exit ramp where Lanier stood holding a sign that read, “Homeless. Anything will help. God bless.” Wright handed Lanier a $2 bill and a can of tuna fish every time he passed. Wright and his wife eventually took Lanier in, giving him a shower, clean clothes, and a place to start over. Years later, Lanier and Wright remain good friends. But Edwin’s still homeless — by choice. Recorded in Durham NC.

A collection of poetry, written and performed by homeless poets, and put to music. From the project’s Sidewalk Prophets CD.

Smith is a writer and English instructor in New Orleans. Once homeless, he spent nights fishing at a city park pond where he met a woman who was deaf-mute — or so he thought. Music by Pascal Fricke.

Writer, anthropologist Alyssa Goodman describes a late-night encounter she witnessed on the streets of Bucharest in Romania. Music by Biosphere.

From the series Hidden Kitchens: So many immigrants, homeless people and others of limited means living in single-room occupancies have no kitchens, no legal or official place to cook. To get a hot meal, or eat traditional foods from the countries they’ve left behind, they have to sneak a kind of kitchen into their places. Crock pots, hot plates, microwaves and toaster ovens hidden under the bed. And now, the latest and safest appliance, the appliance that comes in so many colors it looks like a modern piece of furniture: the George Foreman Grill.

The story was suggested to the Sisters by Margaret Engel, managing editor of the Freedom Forum’s Newseum in Arlington VA, and co-author (with her twin sister Alison) of Food Finds: America’s Best Local Foods and the People Who Produce Them

and 3 CD-set, Hidden Kitchens: Stories and More from NPR’s The Kitchen Sisters (Davia Nelson and Nikki Silva, with Jay Allison)

Masterpiece! A view of homelessness from the inside-out.

This whole episode was so touching. It is far too easy to pass people on the street and essentially not “see” them. At a time when the economy is so precarious and homelessness could happen at almost any time–“I believe 70% of Americans are just one paycheck away from being homeless”–we should take better care of one another.

It especially pained me to hear people describe children making fun of them because they are homeless and/or don’t have any food. Breaks my heart.

This is a beautiful project/piece, education at it’s finest.

Thanks so much for making great radio. As Brittany said: “education at it’s finest”. I think so too.

Perfect! definitely an eye opener. Sparks understanding and provokes the desire to increase community based solutions.