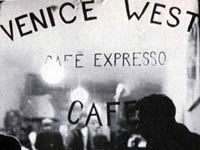 Excepted from an hour radio program, this audio portrait explores the lives of elderly Mexican-Americans in California. David Greenberger talked with residents of East Los Angeles senoir centers about their history, and that of their city and state. Louie Perez and David Hidalgo of Los Lobos created the soundtrack.

The hour was created and produced by David Greenberger with co-producers Jay Allison and Barbara Price, This project is made possible in part, by a grant from the California Council for the Humanities in partnership with the Skirball Foundation, through the jointly supported California Documentary Project, a program of the California Stories initiative.

When the last school bell rings, Pastor Mike Cummings stands in front of Jordan High School in Watts, Los Angeles. Jordan High is next door to the gang-ridden Jordan Downs projects, which students have to pass through to go home — sometimes with Pastor Mike at their side.

We close the hour with the end of Hotwalker: Charles Bukowski & A Ballad for Gone

. With the stories of Little Jack Horton, and Gretchen Peters singing “America the Beautiful.”

Great show this morning.
Please send me the name of the artist and title of the album for the rendition of America that you used in this program.
Thanks very much.
Clem

Paul. Clem: the music you asked about is all from Tom Russel’s album” Hotwalker (links above); TomR wrote all the music. Gretchen Peters sang “America…” and Tony Campise played sax on “Honky Jazz.”