END_OF_DOCUMENT_TOKEN_TO_BE_REPLACED

Host Lynne Neary’s talk with the head Talking Heads, ends up with her answering his questions. From 1984, the “Stop Making Sense” movie and Speaking in Tongues album had just been released.

“A musicians’ guide to warming up” (3:40) Musicians In Their Own Words

“Cecilia Bartoli: Interview” (4:05) Musicians In Their Own Words

One of the world’s great operatic singers explores what it means to approach the human voice as an instrument — like a trumpet or violin, produced by David Schulman.

The cutup artists, Negativland, chew up and spit out the media, turning their NPR interview into audio art; accompanied with excerpts from their 1987 Escape from Noise.

The former Grateful Dead drummer and respected ethnomusicologist takes us on an audio tour of his extensive worldwide percussion collection. He talks about the rhythm “timeline” from his 1987 book and CD Planet Drum: A Celebration of Percussion and Rhythm.

Interviews from the Elvis archives, and new ones with Gordon Stoker of The Jordanaires (Elvis’ backup singers) and Elvis friends (aka, Memphis Mafia) Jerry Schilling and Patty Parry. Produced by Paul Chuffo and Joshua Jackson of Joyride Media, for the Sony Elvis 75 project, which has more music and interviews. Also check Joyride’s other Elvis hours: The Early Years, In Memphis, and He Touched Me- Elvis Gospel Music.

Chuck Denault is a Police Officer for the small town of Kittery, Maine. He has two passions;: Serving the community he lives in and being the best possible Elvis Impersonator he can be. In April of 2003 the producer went for a squad car ride-along for some behind the scenes aspects of law enforcement and Elvis.

In August 1954 Elvis performed his brand new single on the Louisiana Hayride. Taken from the collection The Legend Begins.

Special Bonus Track on the 1982 collection Hitstory- The Story Continues.

“Gillian Welch- ‘Elvis Presley Blues'” (2:45) Musicians in their Own Words

END_OF_DOCUMENT_TOKEN_TO_BE_REPLACED 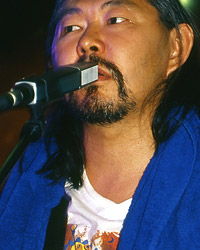 The latest in David Schulman’s Musicians in Their Own Words features vocals by Brazilian Flora Purim, soprano Cecilia Bartoli, folk-singer Gillian Welch, and Tuvan rocker Albert Kuvezin — not in performance but pre-performance, “A Musician’s Guide to the Pre-Concert Warm-Up” (4:25 mp3):