When Carbon Falls in Love

NPR’s Robert Krulwich teams with flashmaster Odd Todd for a “science-y” series of cartoons: NPR : When Carbon Falls in Love, the World Heats Up.

The 365 Days Project at WFMU also recently posted one of the most heavily sampled LPs of all time: “Virginia Belmont’s Famous Singing & Talking Birds.”

Theo Jansen “is an artist and kinetic sculptor living and working in Holland. He builds large works which resemble skeletons of animals which are able to walk using the wind on the beaches of the Netherlands. His animated works are a fusion of art and engineering.”

From the videos at YouTube, “Theo Jansen- Wind Art:”

Just ran across this ol’ KGLT fave, a killer tune by Rilo Kiley, from the movie “Desert Blue” (and hey, I think that’s Randy from My Name is Earl in the vid), “The Frug:”

How a Bill Becomes Law

Inspired by Josef’s comment, here’s Schoolhouse Rock on “How a Bill Becomes a Law”:

Have a happy July 4th weekend; here’s some exemplary government spending, for America’s 200th birthday, funded by a Bicentennial Project Grant, animated by Vincent Collins, this film was produced by the United States Information Agency: 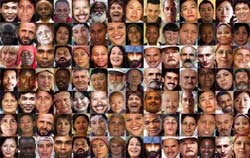 In 2008 you will be able to listen to the thousands of testimonies which have been collected, and add your own testimony to the site. In the meantime, take a look at the project, the team, and some interviews that have already been made.

Morphin’ a Half-Millennium of Masterpieces

Maybe his science ain’t quite kosher, but you gotta admire the conviction of The Guy From Boston, “Global Warming”:

Pop Philosophy in PowerPoint-ese, a film by Clemens Kogler:

We’re starting to build up quite a steaming pile of slideshows… I mean, streaming pile, at YouTube:

They’re from his DVD The Eye is Never Filled, all part of Word Jazz.

WFMU’s Beware of the Blog: Only Fidel Can Provide Candy posted four video “excerpts from what is possibly the greatest propaganda film ever, Ron Ormond’s 1971 commie-bashing If Footmen Tire You, What Will Horses Do?. Be forewarned, the commies do some awful things to these poor kids, and it can get kind of revolting. Portions of this film have been sampled heavily by Negativland, including their classic Christianity is Stupid.”